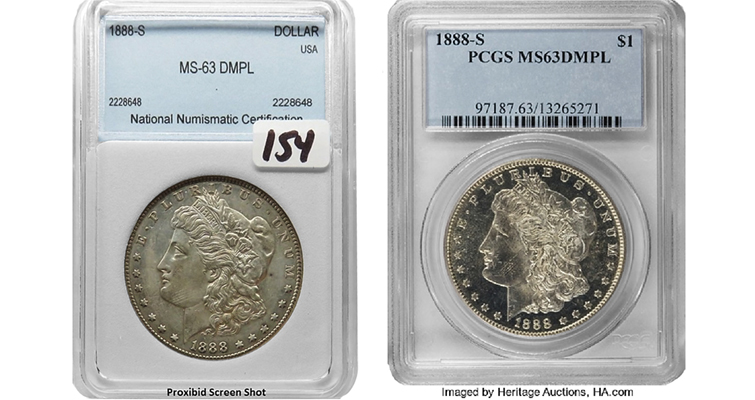 In the past I have written about how to tell deep mirror from polished Morgans. A true DMPL coin is likely to have bag marks because they occur easily against the glasslike surface, whereas no such marks are evident on a polished coin. Also, DMPLs should have mirrors that reflect 6 inches or more on both sides of the coin.

Look at the 1888-S in the photo above in the National Numismatic Certification holder. It seems devoid of any mirrorlike effect, although the reverse of the coin might pass for prooflike, reflecting about two inches. Compare it to the Heritage coin in the PCGS holder. You can see the mirror in the latter but not in the NNC holder.

Admittedly, it is difficult to tell deep mirror coins in online auctions. But this particular Proxibid auctioneer, Weaver Signature Coin and Currency Auction, takes sharp photos that rank among the best on the portal. So I can judge the NNC coin lacks the required mirror qualities of a true DMPL.

Again we encounter the argument that grading is subjective. What passes for DMPL at one holdering company might fall short at another. That’s fine. However, if you choose to bid on a coin in a lesser-known holder, you should not value the coin at prices listed for PCGS, NGC, ANACS and ICG, generally considered to be the best grading companies.

PCGS- and NGC-graded coins often sell sight unseen because of the grading consistency and standards of those companies.

Bidding online is a risky venture, especially when consignors list raw coins as DMPL. If you are viewing inferior photos or have not dealt with the seller before, my advice is to go with major auction houses and bid in online auctions hosted by Heritage, Stacks Bowers, Legend, Goldberg and GreatCollections.