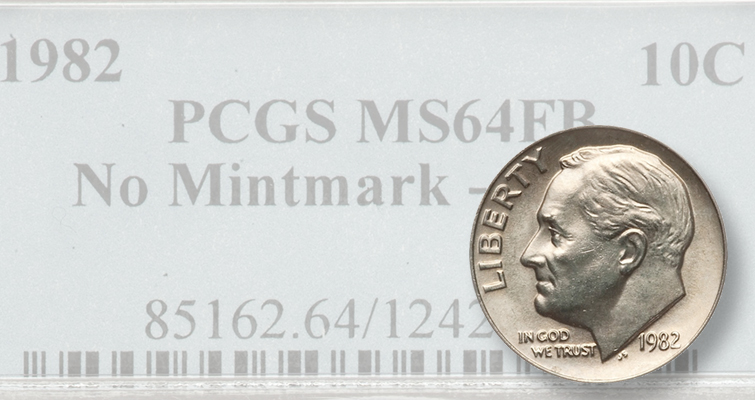 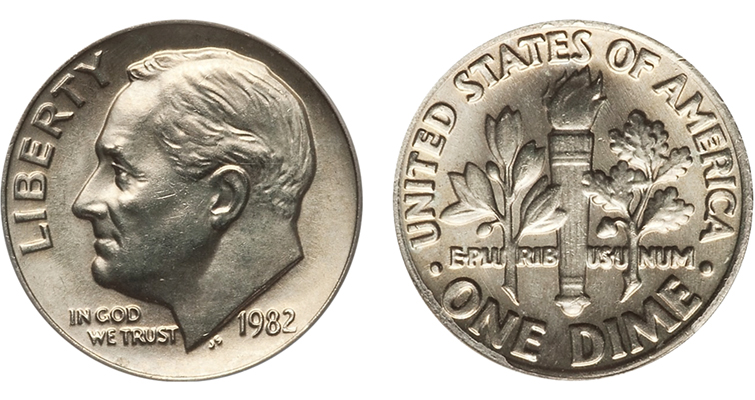 In late 1982 and early 1983, collectors in northwestern Ohio and the Pittsburgh, Pa., area noticed that some 1982 dimes lacked a Mint mark.

Before 1980, Philadelphia coins traditionally did not have a Mint mark. (The P Mint mark was placed only on silver World War II era nickels to differentiate them from pre-war non-silver issues.) That changed in 1980, when the P Mint mark was added to all denominations above the cent.

However, in 1982, the Philadelphia Mint neglected to place a P Mint mark onto one die. The die was placed in production. Apparently workers noticed that coins produced by the die were not well struck and increase the striking pressure after a short while.

The Pittsburgh-found coins were struck before the pressure was increased, and are known to collectors as the less valuable “weak” variety. The “strong” strike coins were released into circulation in northwest Ohio.

Strong-strike 1982 No P dimes catalog for $300 in Mint State 65 in Coin World’s Coin Values. Weak-strike coins are not cataloged there, but tend to sell for less than half the value of strong-strike coins.

The strong-strike coins have a strong association with the nearly 150-year-old Cedar Point Amusement Park.

In an article in the Fall 2012 issue of Central States Numismatic Society’s magazine, The Centinel, Steven Bieda wrote, “In March or April of 1982 the amusement park requested its seasonal allotment of coins through Citizens Bank (of Sandusky). The bank ordered the coinage from the Federal Reserve Bank in Cleveland. As it turned out, the vast majority of the 1982 No-Mint Mark dimes were contained in this order.”

The dimes apparently were paid out in change to customers throughout the 1982 season, providing a boost to circulation searchers.

Next: The 50th anniversary dime