Design competition ahead for 2018 World War I silver dollar 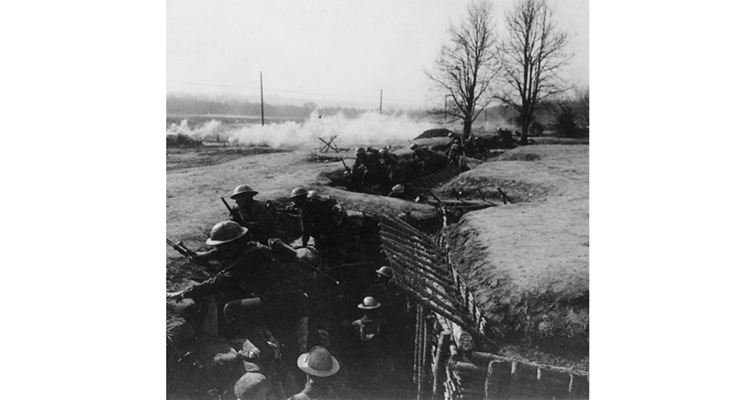 American soldiers in the spring of 1918 during World War I get ready to make an assault on enemy forces from the trenches in France. Image courtesy of Library of Congress.

It will be interesting to see the strength of designs that are submitted under the strict guidelines set forth in the enabling legislation, Public Law 113-212, signed into law by President Obama on Dec. 16, 2014.

The designs for the maximum combined authorized mintage of 350,000 Proof and Uncirculated silver dollars are to be emblematic of the centennial honoring U.S. participation in The Great War, the war to end all wars.

While the start of World War I was triggered by the June 28, 1914, assassination of Archduke Ferdinand and his wife, Sophie, duchess of Hohenberg, U.S. military involvement did not begin until 1917 when President Woodrow Wilson went before a joint session of Congress on April 2, 1917, seeking a declaration of war against Germany. The Senate approved the declaration on April 4, with the House concurring two days later.

The coin design competition calls for a seven-person jury chaired by the Treasury secretary, and three members each chosen from and by the respective memberships of the Citizens Coinage Advisory Committee and Commission of Fine Arts.

The final design selections are to be made by the Treasury secretary, who will set the rate of compensation to be not less than $5,000, according to the authorizing act.

The act further mandates that each design submitted must be accompanied by a plaster model otherwise the designer risks having their submission rejected. That limitation for talented professional and amateur artists not schooled in or otherwise proficient in sculpting or modeling might preclude their participation.

It will be several weeks before the Mint outlines the complete rules for the design competition. Among the issues to be considered are whether the current outside artists comprising the Artistic Infusion Program will be eligible to participate. Same for the members of the U.S. Mint’s engraving staff, who are tasked with sculpturing the approved designs, regardless of the winning designer(s).

The engraving staff members receive no additional compensation beyond their government salaries for approved designs that they submitted or for sculpturing the own approved designs or the approved work of another artist. That likely won’t change with the 2016 design competition.

Let’s hope the winning designs strongly reflect the sacrifices made by the 4 million men from the United States who served during World War I. They deserve nothing less.