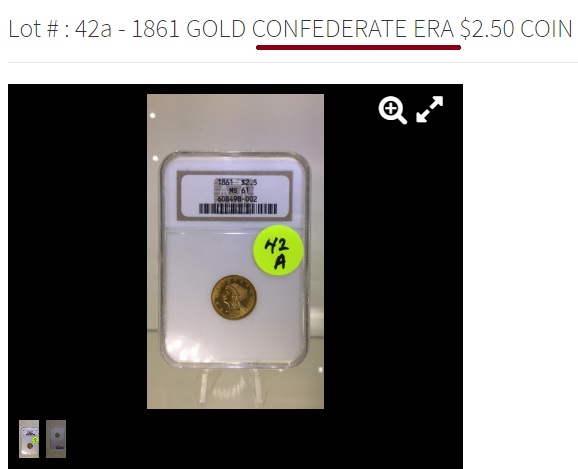 This one lot caused a lot of online consternation.

As a rule, I check out service terms of online auctions as well as certifications from major holdering companies, to guard against fake holders and counterfeit coins. I also can use PCGS CoinFacts and NGC Price Guide auction values to help me make a reasonable bid.

This 1861 gold $2½ quarter eagle in a HiBid auction above caught my attention because of the description: “Confederate Era.” In my view, that phrase was unnecessary, but the lot was posted shortly after the recent uproar about Confederate statues. Yes, it is true — 1861 happened during the Civil War —  but I would have preferred that term rather than the phrase used, especially since this gold coin was minted in Philadelphia.

Nonetheless, a fact is a fact, and so I restrained the impulse to send a note to the auctioneer.

This auction uses flat bids, which means you enter a bid indicating how much you’re willing to pay. For example, say I entered $600 for this coin: It doesn’t matter if the last bid was $500 with no one else willing to go higher. I would pay $600, flat. This type of bidding moves the auction along quickly, and some buyers even prefer it.

The coin was graded by NGC, but the price guide value was not available. (I notified NGC about this, so the value might have been added by the time you read this. NGC is always open to amending situations like this, which I appreciate.)

However, because the NGC value was not available, I went to PCGS CoinFacts and found that this particular coin has a “new” and “old” reverse. The NGC label doesn’t indicate that, but PCGS  Coinfacts states: The Old Reverse has an OVAL “O,” while the New Reverse has a ROUND “O.”

OK. I went back to the Hibid photo of the reverse, which was too blurry for me to distinguish old from new.

Sometimes the online auction experience can cause consternation. May your bidding be more enjoyable.