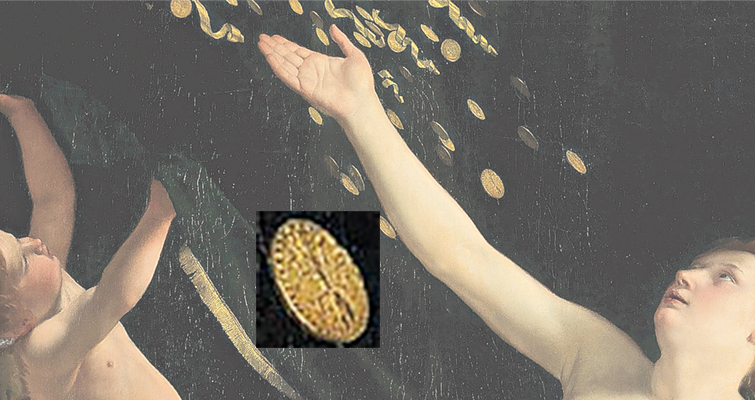 A detail of the top of the painting of “Danaë” by Italian Baroque painter Orazio Gentileschi depicts gold coins with Jupiter’s thunderbolt. The painting will be offered at auction in January 2016.

Orazio Gentileschi’s “Danaë,” 1621 or 1622, stars in Sotheby’s Jan. 27, 2016, sale of Old Master Paintings in New York, with a presale estimate of $25 million to $35 million. Here Danaë is showered with gold coins, some marked with Jupiter's thunderbolt, in harmony with the legend. 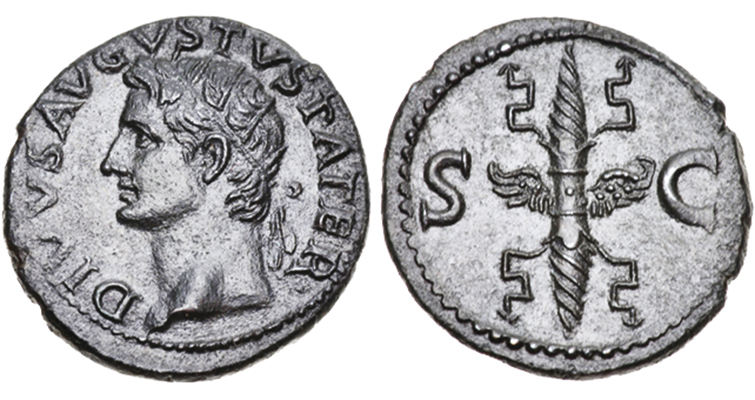 A bronze as of Tiberius shows Jupiter/Zeus's mythical thunderbolt in sharp detail on the reverse. This coin, from circa A.D. 34 to 37, sold in CNG's Triton XIV auction for $2,400, against an estimate of $500. Italian Baroque painter Gentileschi appears to have imagined such a coin in gold. 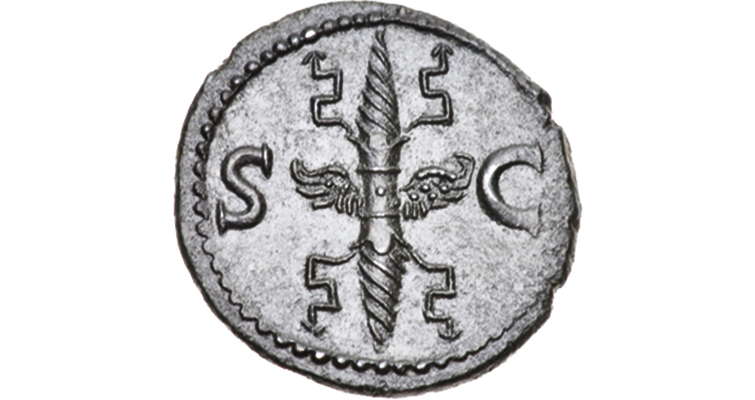 Bronze as of Tiberius, circa A.D. 34 to 37, shows Jupiter's thunderbolt in sharp detail.

What will be possibly the most expensive Old Master painting to ever appear at auction has a numismatic connection. Italian Baroque painter Orazio Gentileschi’s “Danaë,” dating from 1621 or 1622, will star in Sotheby’s Jan. 27, 2016, sale of Old Master Paintings in New York, with a presale estimate of $25 million to $35 million. Sotheby’s has called it an “undisputed masterpiece” and “one of the most Important Baroque paintings to come to market since World War II.”

The story of Danaë is a classic one in mythology that would have been well-known to contemporary viewers of the painting. She is confined to her chamber by her father, the king of Argos, and visited by Jupiter – god of sky and thunder – who impregnates her in a shower of gold. Gentileschi’s depiction uses Cupid to pull back curtains to reveal a nude Danaë, showered with gold coins and golden ribbons. The picture was commissioned in 1621 by the nobleman Giovanni Antonio Sauli for his palazzo in Genoa.

Depictions of this scene often use gold coins to represent the shower of gold, and it seems that Gentileschi depicts gold coins with Jupiter’s thunderbolt, lest the viewer forget the mythological underlying story that serves as a reason to depict the nude female form.

Sotheby’s added, “The nuanced treatment of the satin, linen and metals, combined with the refined composition of the overall setting, results in a sumptuous work of art and a dynamic representation of one of the defining moments of early seventeenth-century painting.”