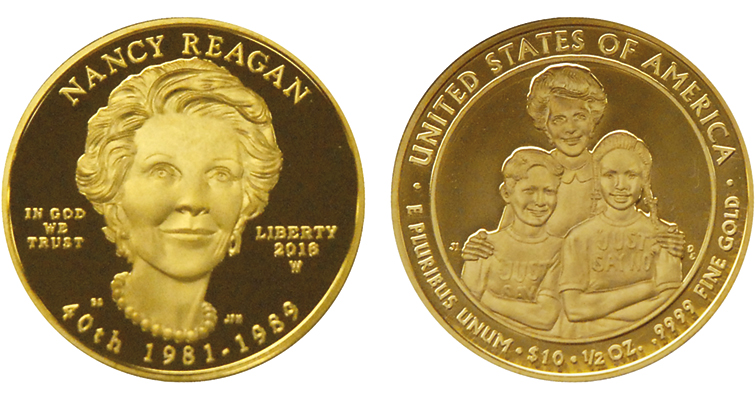 On an as-yet-undisclosed date in July, the U.S. Mint will offer Proof and Uncirculated versions of the 2016-W Nancy Reagan, First Spouse $10 gold coin, the final release in the 10-year series.

How popular the issues will be depicting Mrs. Reagan, who died March 6 at the age 94 before the coins were put into production at the West Point Mint, remains to be seen.

Her husband, Ronald Reagan, was one of the most popular American presidents.

Production of the Nancy Reagan First Spouse gold coins will be executed to order, according to West Point Mint officials. There has been no set authorized maximum mintage announced.

When the series was launched in 2007 with the Martha Washington and Abigail Adams coins, the maximum mintage across all products was 40,000 for each First Spouse.

The distribution between Proof and Uncirculated coins was to be determined by the orders received. That did not happen.

After sufficient orders were received to fill the maximum authorizations for the Washington and Adams coins, U.S. Mint Sales and Marketing officials decided to limit the distribution to 20,000 coins per version per First Spouse.

Since then, annual maximum mintages have been steadily reduced. Some recent issues have recorded sales below 2,000.

How many First Spouse coins since their release have been melted on the secondary market is unknown. One may only speculate.

As the series comes to a close, it will be interesting to see how the values of previous issues performed, especially if new collectors decide to take up pursuing a complete collection of Proof and/or Uncirculated versions.