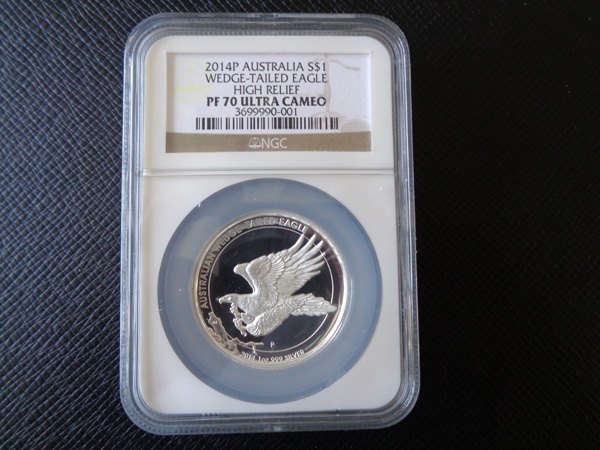 Once a year I submit a group of coins to be graded by one of the two leading coin grading services, NGC and PCGS.  In the recent past I have usually submitted modern U.S. coins and have avoided sending classic U.S. coins because like many people when I did so some of my coins came back with “details grading” due to unoriginal surfaces.

But this year I decided to try a different approach and sent in a nice group of modern world coins instead.  I typically buy such coins in their original government packaging because they are cheaper that way, and this type of coin usually comes in an impressive display box.  Once in a while I will purchase an already graded coin if the price is right.

I was curious to see what kind of results I would get sending in some of my favorite modern world issues, especially since several of them sell for a substantial premium in the top grade of 70.  Plus they looked to be virtually flawless to me, though like many collectors I have often trouble seeing the difference between a 69 and a 70.

I ended up getting 70s on three of my five submissions, which was a very good result since I added several hundred dollars of value to the coins by going through this process.  It probably would have been more difficult to do this with recent U.S. coins.

It is worth considering that while the market for graded modern U.S. coins is becoming rather saturated, especially for American Silver Eagles, not nearly as many modern world coins get graded.  And the premiums buyers pay for 70s of such coins can be quite steep indeed.

In fact, for one of my new 70s I own one of only two such coins that have received the top grade by that company so far.  Of course this is probably because not many such coins have been submitted, but the fact remains that this adds something to the coin’s appeal and marketability.

If you want to know more, check out my forthcoming article in the magazine this fall on the market for graded modern world coins.