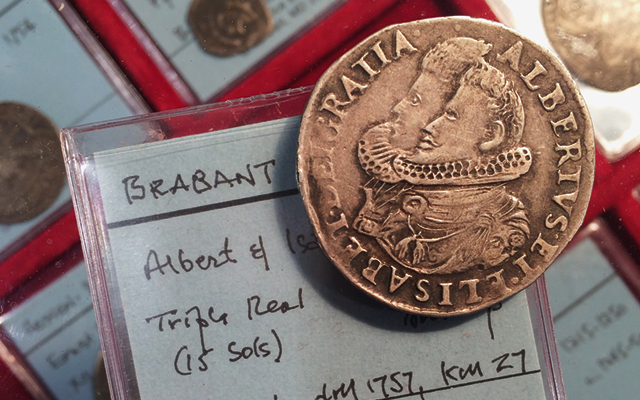 ... and discovered a 17th century European coin where both parties depicted have a serious case of “bed head.”

Image courtesy of the author

Which of today’s coins will hold their value over time? In light of the media coverage from both within and outside of our hobby on the release of the gold 2014-W Kennedy half dollar, it’s a relevant question to ask.

As I write in our new investment column, conveniently titled “The Investment Column,” quality, rarity and desirability are three core values at the center of successful rare coin investment for lasting value. The same was true a century ago and the same will be likely be true hundreds of years from now.

Much of what passes for investment today is mere speculation, but, over time, collectors who have stayed true to their interests and have built a depth of experience and knowledge in a given area have built collections that stand the test of time (and often reap large profits once sold).

Consider the current popularity of coins that are certified by major grading services in special holders recognizing that they’re sold on the first day of issue. For many collectors, these represent exciting souvenirs of a coin show and a chance to own a story alongside a coin. Other collectors wouldn’t even entertain the idea of paying a premium for a first-day-of-issue coin that is most likely physically indistinguishable from the last coin that leaves the Mint’s presses.

It is this difference of opinion that ignites our hobby. Ultimately, it is up to us individually as collectors to determine value. If multiple collectors are willing to pay a premium for a given item, that makes it collectible. Now, does the current market’s high prices for first-day coins have lasting value or is it a passing fad? That’s a question that only time can decide.

In short, collect what you like. Learn about it. Seek out the best and have fun with your collecting. Life is simply too short to buy coins you don’t love.