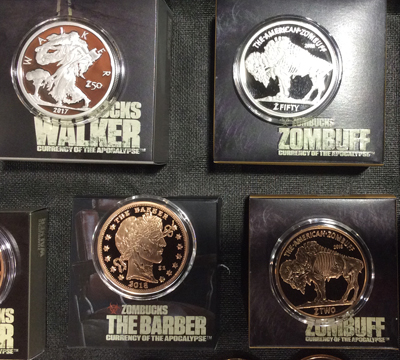 Provident Metals, producer of the Zombucks series of post-apocalyptic coins, is among those dealers that now accept virtual currency like Bitcoin from purchasers of coins and precious metals.

Where traditional meets new-fangled, Coin World is there. And apparently so is Provident Metals.

“The value of cryptocurrencies and precious metals are market driven, and they both appeal to forward-thinking investors," Provident Metals CEO Joe Merrick said in a July 22 company release. “This integration was logical because many of our customers are proponents of alternative currency, and it's our job to respond to their needs.”

A post to Provident’s company blog on Aug. 25 reminded customers of the the new payment option.

“The new payment method allows online customers to use theses cryptocurrencies on all products through a simple and secure process,”the blog post reads.

Provident offers customers who pay with virtual currency a 2 percent discount off its listed price. (Those who pay with cash are offered a 2.99 percent cut.)

That means the About Uncirculated or better gold $20 Saint Gaudens double eagles listed on Provident’s website at $1,449.93 (at approximately noon Eastern Time on Aug. 26) would cost virtual currency users $1,420.78. With the value of 1 bitcoin sitting at $513.05 according to Google Finance (again, as of noon ET on Aug. 26), a Provident customer would have to cough up about 2.77 bitcoins for a double eagle.

Provident isn’t the first or only numismatic dealer to go virtual.

Harlan J. Berk in Chicago—which deals in ancient coins, U.S. coins, U.S. paper money, antiquities, autographs, paintings and books—accepts bitcoins as payments, according to its terms and conditions of sale.

Taking it a step further is Denver-based Amagi Metals. Not only does Amagi already accept Bitcoin, it plans to stop taking U.S. dollars at the end of 2016 and accept only virtual currencies.

“We want to be a leader in the sound money movement,” Amagi CEO Stephen Macaskill said in an Aug. 20 release.“With the adoption of cryptocurrencies increasing every day, their viability is virtually assured. History shows that paper currency, backed by nothing of value, will ultimately fail. It’s only a matter of time until no one will be accepting the dollar.”

Buying bullion with bitcoins. Did your mind just break?