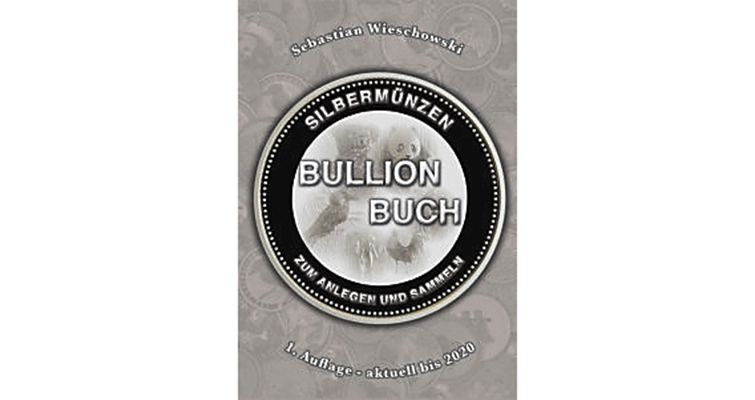 By Sebastian Wieschowski, "Bullion Book: Silver Coins for Collectors and Investors," available in both English and German editions, fills a need in the hobby for a well written, widely encompassing reference on world silver coins.

Even with the rise of interest in numismatics in China, Germany, and other countries, the U.S. coin market still overshadows the others in most ways. And the U.S. market is, of course, dominated by the market for U.S. coins – classic and modern – despite rising interest in world coins.

As a result of this situation, numismatic publishing, in particular in the area of guidebooks and reference works, is substantially more developed for U.S. coin series than it is for world coins.

One area in the modern world coin realm that has long been in need of a good reference guide is that of modern world silver coins, an increasingly popular area for both coin collectors and silver investors.

It is that very intersection between silver stacking and building sets of silver coins that provides the backdrop for a new book by German author and journalist Sebastian Wieschowski, who previously served as editor-in-chief of the investment journal, Goldblatt, and is the author of other books on precious metal investment and euro coins.

Called Bullion Book: Silver Coins for Collectors and Investors, the new work is available in both English and German editions and begins with three concise chapters that explain why interest in modern world silver bullion coins has increased in recent years and why it is likely to expand even further.

The author also explains why silver is an attractive form of precious metal investment, such as its diverse industrial, medical and other uses; its much lower cost compared to its “big brother gold”; why it is probably very undervalued in light of the historic silver-gold ratio and the fact that it has not rebounded as much as gold has since the highs of 2011; and its finite quantity that makes its actually scarcer than gold.

Sebastian also explains the many reasons why silver bullion coins are a preferred way to invest in silver, such as the fact that the coins are monetized by sovereign governments; issued in many cases in limited quantities and with changing designs; easily tradeable; and far more useful than gold in a financial emergency as a replacement currency, since smaller amounts of silver could be used to purchase daily necessities.

The bulk of the 180-page book consists of brief chapters on each of the major silver bullion coin series issued today from major world mints in Austria, Australia, Canada, Great Britain, Mexico, and the U.S., as well as most of the better-known series from smaller and private mints issued for countries like the Cook Islands and Niue.

Each of these chapters discusses key background to the series, the factors that shape the rarity of the coins, and the range of products issued, including special editions and collector versions.

And each chapter also includes excellent, high-resolution images of each bullion coin in the series through the 2017 issues, which is very useful to identify the coins and to help in determining if a coin one encounters is genuine.

The book ends with a rarity report that uses a star system going from one to five stars that is used to rate the rarity of each issue in the series covered in the book.

Bullion Book fills an important gap in the literature on modern world coins and should help further stimulate interest in this rapidly growing area of numismatics. As the author explains, these coins have become highly sought collectibles with many past issues of series like the China Panda or Australian Lunar series selling for many multiples of their silver value.

When the author comes out with a second edition, that one should include some important new series like the Silver Swan and Dragon and Phoenix from the Perth Mint and the Czech Lion, as well as others. He may also want to include a discussion of why the 2005 Kangaroo from Perth was released after the 2006 issue.

The book can be purchased on eBay and directly from the author, who can be contacted through his Facebook page. He also offers a news update service on his blog, www.bullionblog.eu.