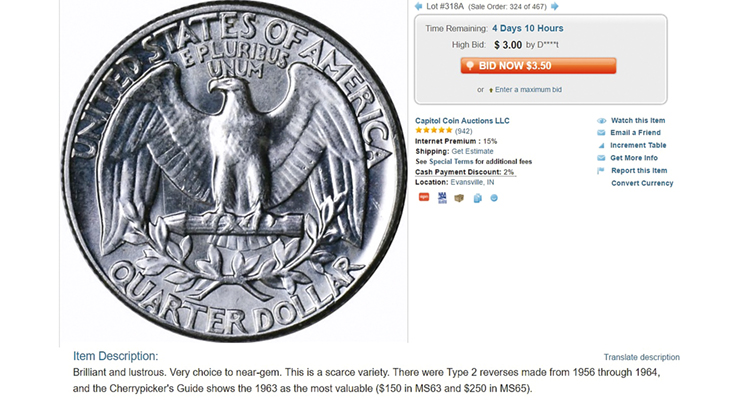 Few private online coin auction sellers write as expert descriptions and include such quality photos as Brad Lisembee does. You can learn much about grading merely by visiting his Capitol Coin Auctions listings, and he has two sales upcoming, April 20 and May 4 on Proxibid.

Brad Lisembee, owner of Capitol Coin Auctions, Evansville, Ind., is one of the best sellers—if not the best—in online coin estate auctions. Apart from numismatists in large houses such as Heritage Auction and Stacks Bowers Rare Coins, few small-company sellers or coin dealers take the time to write accurate descriptions with highly detailed photos that often are superior to anything on the web.

Take a look at the lot featured above in one of Lisembee’s upcoming auctions on Proxibid. He writes: “Brilliant and lustrous. Very choice to near-gem. This is a scarce variety. There were Type 2 reverses made from 1956 through 1964, and the Cherrypicker's Guide shows the 1963 as the most valuable ($150 in MS63 and $250 in MS65).”

He would give a numerical grade for this coin, but that goes against Proxibid rules for raw coins (which I applaud because of seller grade inflation). So Lisembee uses the correct terms “very choice to near gem” which would translate to Mint State 63 to MS-64. He notes this particular coin is a scarce variety and gives information from the Cherrypicker’s Guide, an essential book in every numismatist’s library. Then he cites values conservatively.

You don’t find this often on Proxibid or Hibid.com. In fact, most sellers there overlook flaws, varieties and accurate grading. (Because of Proxibid rules, hyped descriptions are not nearly as common anymore.)

Lisembee does much more than this numismatically. He is extraordinarily honest.

When he gets an estate collection, Lisembee uses his numismatic skills to decide which raw coins he will send to PCGS. Many sellers do this. But few write a description on the remaining coins—these in a Capital holder—like this lot:

Consider this lot on a key date 1938-D Walking Half Dollar. He writes: “VF, couple of thin obverse scratches.” Many sellers do not mention pin scratches and other flaws, such as cleaning or corrosion.