A most uncommon common dime 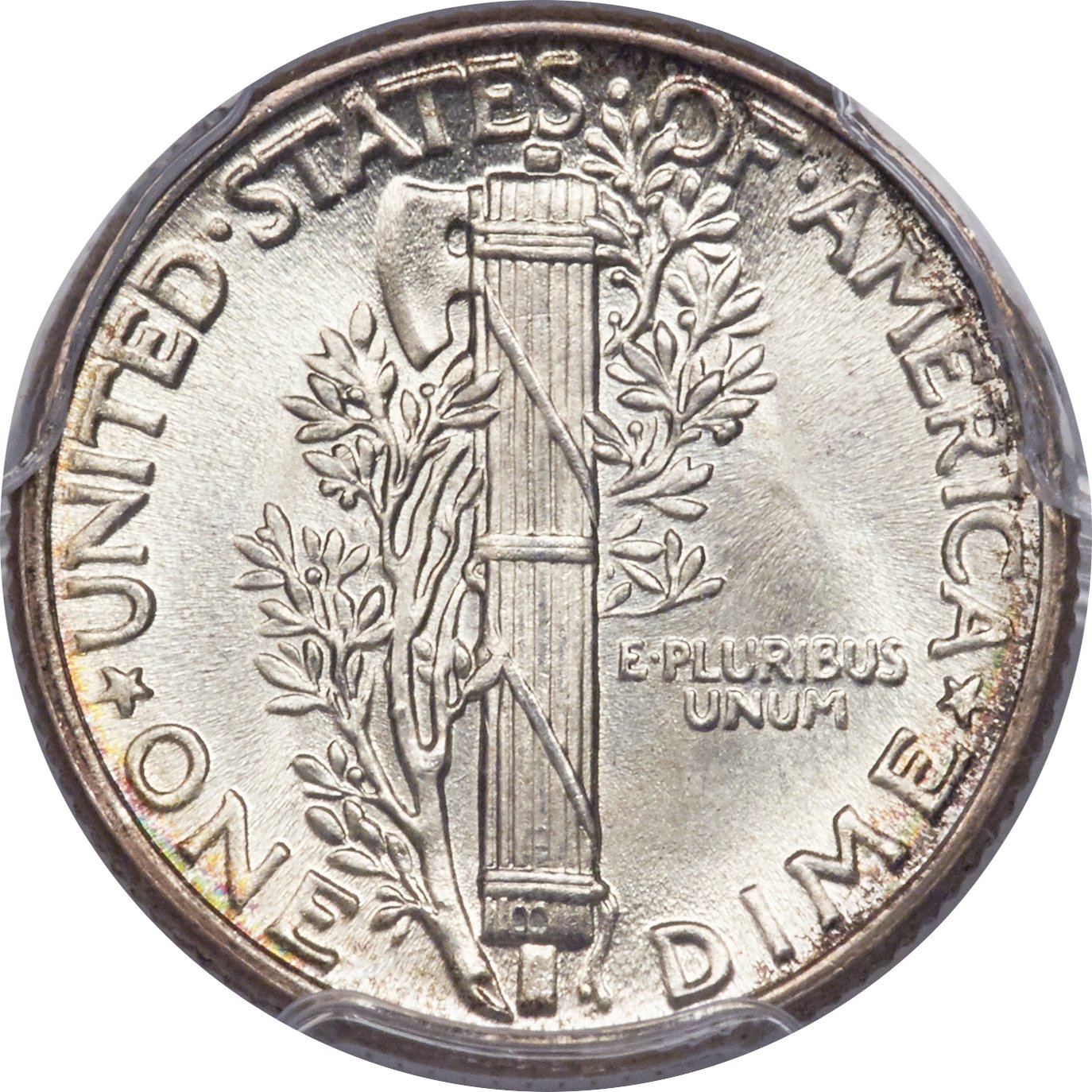 The 1945 Philadelphia dime is the fifth most common Winged Liberty Head (Mercury) dime. Circulated examples trade for silver bullion value and Uncirculated ones catalog for $7. However, if the coin is sharply struck, as this one is, creating fully split bands on the fasces on the reverse, the value can climb to $20,000. 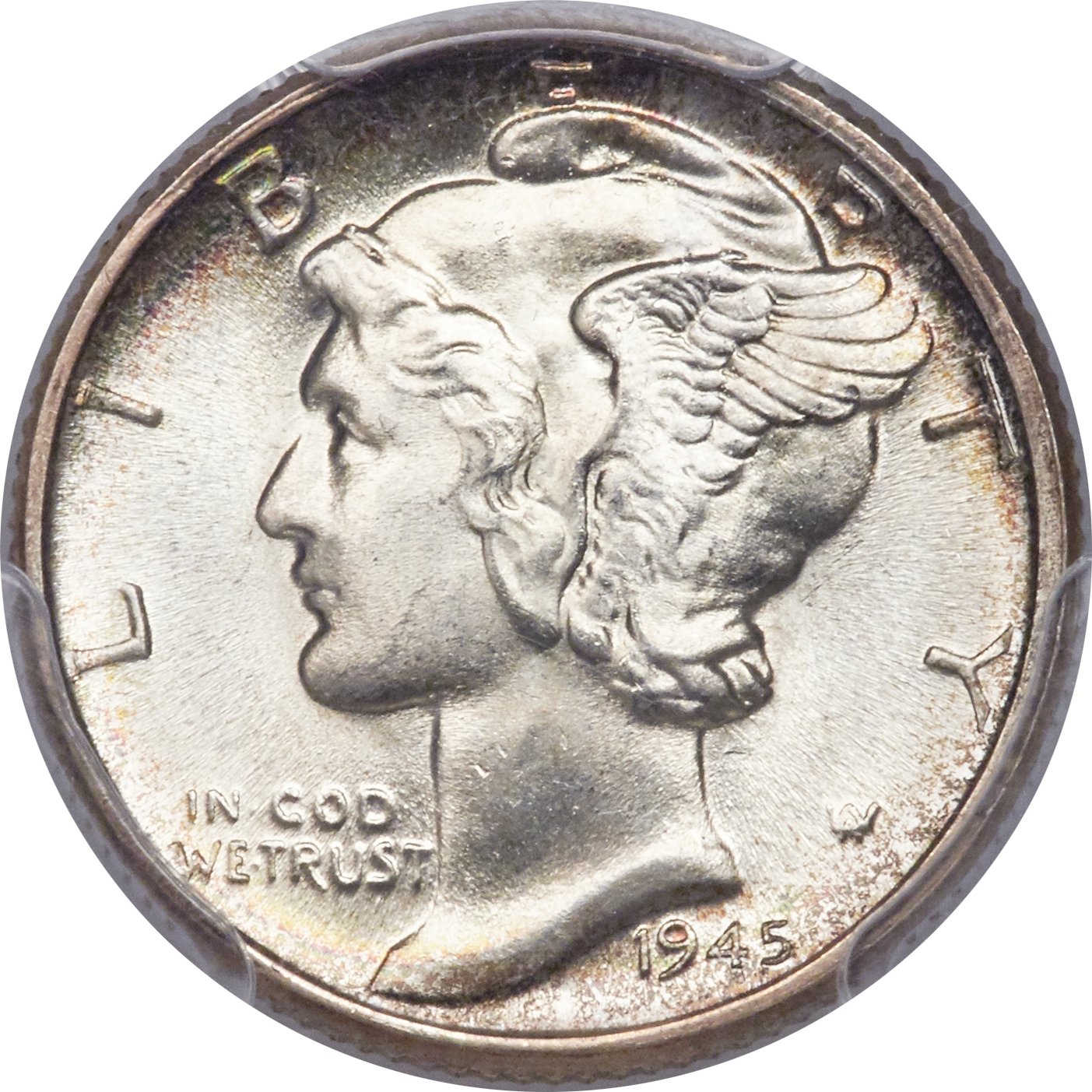 With a mintage of more than 159 million, the 1945 Philadelphia dime is the fifth most common Winged Liberty Head (Mercury) dime. But sharply struck it become a rarity — the "value" is on the back, where fully split bands can add thousands to the retail value.

With a mintage of more than 159 million, the 1945 Philadelphia dime is the fifth most common Winged Liberty Head (Mercury) dime. Circulated examples trade for silver bullion value and Uncirculated ones catalog for $7.

However, if the coin is sharply struck, the value can climb to $20,000, the Coin World Coin Values listing for a coin in Mint State 66 with Full Split Bands.

The fasces on the coin’s reverse is bound with a pair of bands at top, bottom and middle. The top and bottom bands are nearly always separated, but the center bands not so much. The center bands are the high point of the reverse design. If the strike isn’t sharp, the metal fails to flow into the die’s cavity allowing the pair of center bands to merge. Only on fully struck coins are the bands entirely separated – fully split.

Writing on the PCGS Coin Facts website, PCGS President Ron Guth wrote, “The 1945 Mercury Head Dime is a very common coin with one exception – if it has Full Bands. Thousands of 1945 Dimes have been certified in Mint State (almost 7,000 at PCGS alone), but barely over a hundred show full Bands. For collectors looking for fully struck Dimes, the 1945 Dime with Full Bands is the ultimate condition-rarity.”

Writing on the same website, David Hall, said, “I first became aware of the ‘Full band’ situation with Mercury dimes in about 1975. I was at a coin show and the late Tom MacAfee said to me, ‘I want to show you something very special and teach you something about Mercury dimes.’ So he pulled out a 1945-P and told me he had just sold it to a customer for $50. Since this was a $2 coin as far as I knew, I was pretty puzzled. Tom told me to look at the bands on the reverse. He said if I could find another one with full bands he'd pay me $40. And so I started looking for that date and others and soon discovered that some Mercury dimes...1943-D, 1944-D, etc...always come with full bands, and some so-called easy dates in Uncirculated condition are really rare with full bands.”

Knowledgeable collectors became aware of the importance of the center bands in the 1970s. By the 1980s some dealers began catering to the cognoscenti.

The 1945 Philadelphia dime with full split bands is an extremely uncommon common coin and one of the most valuable.

In his Complete Encyclopedia of U.S. and Colonial Coins, researcher Walter Breen cautioned, “occasional separations have been fraudulently enhanced by hand tooling.” A skillful crook can raise a $7 coin to a $20,000 one.

Next: The amusement park rarity