Dime series: A coin for a man without a country 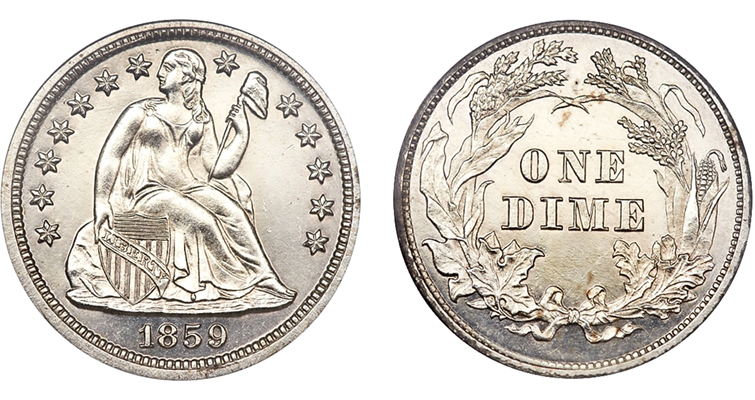 On the pattern 1859 half dimes and dimes struck with an 1859 obverse and an 1860 reverse, neither side says UNITED STATES OF AMERICA — making the coin without a country the perfect piece for the man without a country. The dime pattern is shown.

A coin for a man without a country

I SUPPOSE that very few casual readers of the “New York Herald” of August 13, 1863, observed, in an obscure corner, among the “Deaths,” the announcement, —

There are hundreds of readers who would have paused at that announcement, if the officer of the “Levant” who reported it had chosen to make it thus: “Died, May 11, THE MAN WITHOUT A COUNTRY.”  — The Man Without a Country

Edward Everett Hale wrote The Man Without a Country in 1863 to promote patriotism in the North during the Civil War. The fictional short story told the tale of Army Lt. Philip Nolan who is court martial for joining Aaron Burr in an early 19th century plot against the United States.

His wish was granted

“Prisoner, hear the sentence of the Court! The Court decides, subject to the approval of the President, that you never hear the name of the United States again.”

Nolan laughed. But nobody else laughed. Old Morgan (who was holding the court) was too solemn, and the whole room was hushed dead as night for a minute. Even Nolan lost his swagger in a moment. Then Morgan added,—

“Mr. Marshal, take the prisoner to Orleans in an armed boat, and deliver him to the naval commander there.”

The marshal gave his orders and the prisoner was taken out of court.

“Mr. Marshal,” continued old Morgan, “see that no one mentions the United States to the prisoner. Mr. Marshal, make my respects to Lieutenant Mitchell at Orleans, and request him to order that no one shall mention the United States to the prisoner while he is on board ship. You will receive your written orders from the officer on duty here this evening. The court is adjourned without day.”

For the next 50 years Nolan served his sentence aboard a succession of ships, never to hear the words United States of America again until he was on his deathbed.

Hale makes no mention of the coins Nolan could have used during his confinement, but there is only one option — the pattern 1859 half dimes and dimes struck with an 1859 obverse and an 1860 reverse.

The 1859 obverse shows a Seated Liberty surrounded by 13 stars and the date. The 1860 reverse shows a wreath of cereals (corn and wheat as well as oak and maple leaves) and the denomination.

An estimated 12 to 15 such coins exist, all in Proof.  Their origin is a mystery. However, they are generally believed to be what researcher Walter Breen called “pieces de caprice” coined at the direction of either Mint Director James Ross Snowden in 1860 or Mint Director Henry Linderman as late as 1868, like so many other pattern coins of the period, for sale to favored collectors.

Next: The ice cream dime