A cent you can’t buy

Although cents may have been struck in late 1815, none was struck from dies dated 1815; the dies were likely dated 1814. Some real large cents have had their dates altered to read 1815. The date shown at left is from an 1813 Classic Head cent that was modified, and the date at right is from an 1845 Coronet cent that was modified. Any cent with an 1815 date is either altered or a counterfeit. 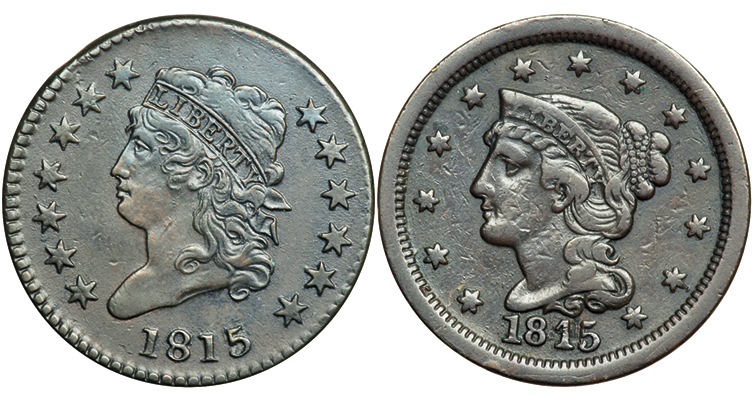 These images show real large cents that have dates altered to read 1815. On the left is an 1813 Classic Head cent that was modified, and on the right is an 1845 Coronet cent that was modified. Although cents may have been struck in late 1815, none was struck from dies dated 1815; the dies were likely dated 1814. Any cent with an 1815 date is either altered or a counterfeit.

Blame the War of 1812. Before the war, the Philadelphia Mint bought cent planchets from Matthew Boulton of Birmingham, England. That source dried up with the start of hostilities. There were no domestic suppliers. In his Complete Encyclopedia of U.S. and Colonial Coins, the late researcher Walter Breen reported the Mint had no stomach for buying scrap copper and making its own blanks with its own “marginally functional rolling mills.”

Toward the end of 1814, the Mint struck its remaining copper stock and delivered 357,830 coins. By some accounts, those coins were the last produced of John Reich’s Classic Head design.

Those coins, Breen claims, went into the pay packets of Mint workers. He wrote that the Treasury Department for some “mysterious reason” refused to authorize Mint Director James Patterson to pay his workers. In December, Patterson “overrode Treasury policy” and paid his staff with bright copper coins.

Breen claimed the Mint ordered more planchets from England as soon as the wartime embargo against trade was lifted in 1815, but the blanks did not arrive until 1816.

However, Bill Eckberg, writing in the Jan. 21, 2015, issue of Coin World reported, “Once the war was over in early 1815, the Mint ordered 5 tons of planchets from Boulton. These arrived in the fall and were struck into coins as soon as possible. The resulting 465,500 cents were delivered on Feb. 27, 1816.”

The mystery is, then, when were those coins struck and what was the date on those coins? It clearly was not 1815.

If the coins were struck as soon as the shipment of blanks arrived, they were struck in 1815, likely using still serviceable 1814 dies. Dies were expensive and difficult to produce in the early days of the Mint. They were used until they wore out, no matter what date they bore.

The lack of 1815 cents hasn’t stopped collectors from placing them in their collections. Con-men, pranksters and hole-fillers have produced their own 1815 cents by altering 1813 and even 1845 cents to fill the gap.

Next: Fooling the public