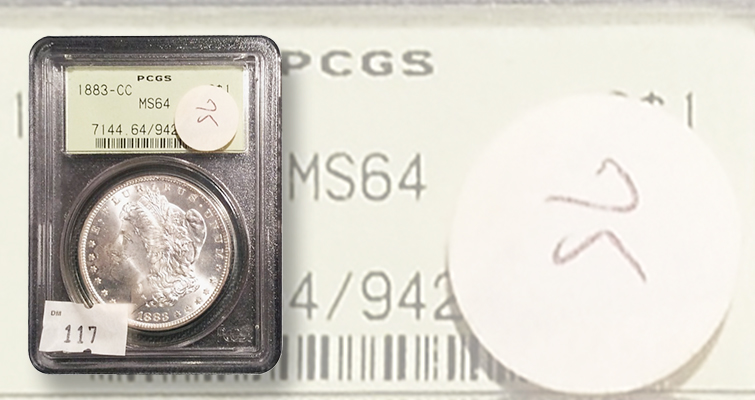 Sample photo is from a lot illustration in an estate auction on Proxibid. Shown is an MS-64 1883-CC Morgan dollar, where, of course, the auctioneer had the same sticker habit that so many have, putting a sticker on over the slab's certification number. 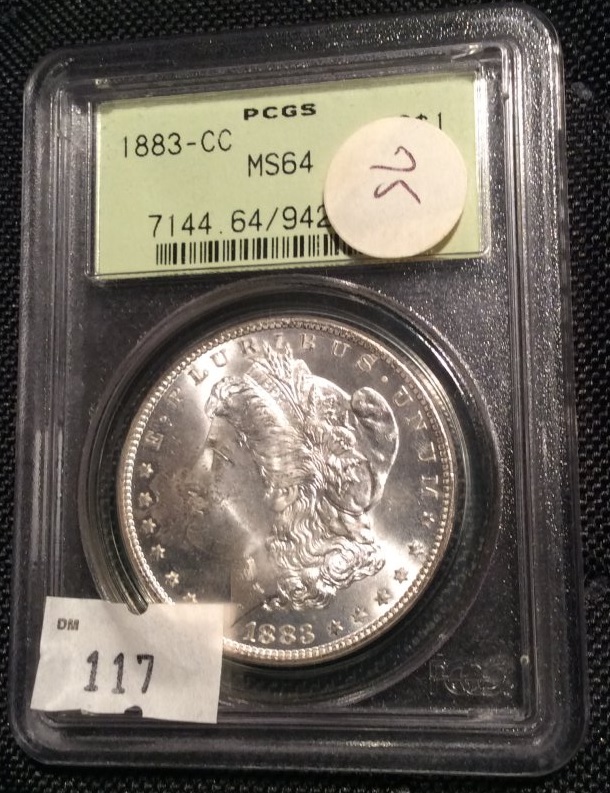 Regular viewers of my blog know that I often register for Proxibid estate auctions, understanding the risks and rewards of doing that. But when older PCGS and NGC slabs go on the block, as happened this month, I go on the offensive, trying to win at least one or two of those coins.

Such was the case in the Dec. 10 auction by Metzger Property Services, an Indiana firm. There were green holder PCGS, older holder NGC and ANACS, and even double Mint sets, though I bid cautiously there and didn't win any. Some of the lots labeled “Mint sets” from the 1950s had Proof set envelopes, and others were sealed so you couldn’t see the coins.

When in doubt online, don't bid. That's my motto.

Lots featuring slabbed coins had photos of only the obverse, and the photos were shot on the horizontal. I rotated the sample photo above of an MS-64 1883-CC Morgan. Of course, the auctioneer had the same sticker habit that so many have and put one on over the certification number. I’ve written about that before here, in a post titled “Stickers, Barcodes and Counterfeit Holders.”

I did manage to win a few lots with bids close to retail, and when I received the coins in a timely manner — a credit, by the way, to Metzger Auction, as this is not always the case with Proxibid sellers — I was pleased to see the condition of the coins.

I know that many Coin World readers continue to believe fervently in grade inflation, touting the good old rattler and fatty holder days when PCGS and NGC graded according to tougher standards. My theory is that early PCGS and NGC graders were inconsistent, under-grading many and over-grading some, with the others about right. But we’ll leave that topic for another day.

The green holder PCGS coins from this auction were graded about right to a half or point higher, in my estimation.

But the experience wasn’t all pleasant when I opened the large, padded USPS priority envelope. The auction company hadn’t put the holdered coins in cardboard first, so the slabs rattled around during transport. And if you collect PCGS coins, you know what happens when that happens: the slabs chip.

There is nothing you can do when that happens with an estate auctioneer. All sales are final. But if I bid again on his auction, I'll give him a call about correct packing of numismatic items. So my three PCGS coins are re-submitted for new holders and, while there, reconsideration.

I'll let you know what happens in a future column.