?The Speed of Light: Second Code of Future Coin Launched 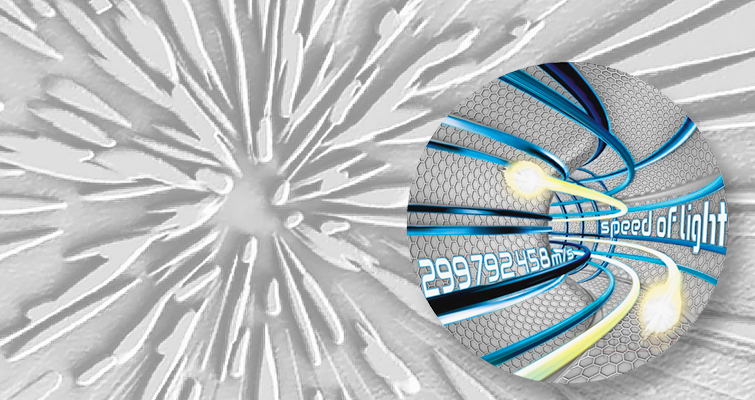 Original images courtesy of the Mint of Poland. 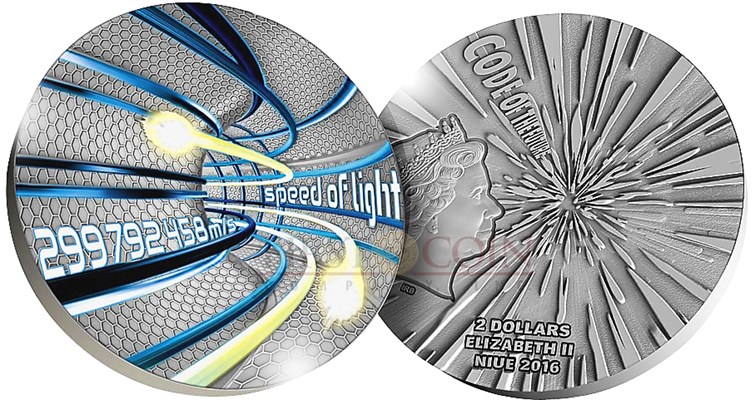 The Mint of Poland has announced the launch of the second coin in its popular series, Code of the Future, which began in July with the release of the first coin, which was about artificial intelligence.  That coin was one the most successful of 2016, selling out quickly and continuing to hold its value.  Its appeal is due to the unusual design and a theme that resonates with many people because of the increasing role of artificial intelligence in our society.

The artificial intelligence coin is already well known in modern numismatic circles and will become increasingly hard to find in the future.

Now comes the second coin, The Speed of Light, which like its predecessor is a 2016-dated, $2 legal tender Niue coin made of two ounces of .999 silver.  The coin is struck in impressive high relief with intricate details, has an antique silver finish, and a large, 50-millimeter diameter.  In addition, the serial number of each coin appears on the coin’s edge.

And perhaps best of all the design is highlighted with fluorescent UV (ultra violet) coloring, which enables it to glow in the dark after placing near a light source briefly and then looking at it in a dark environment.

The mintage is just 500 coins, a miniscule amount considering the expected high global demand for this piece.  The coin is housed in an attractive wooden box with a colorful shipper and has its own certificate of authenticity.

The obverse of the coin has a reduced-sized effigy of Queen Elizabeth by Ian Rank-Broadley and a very futuristic design with flying lines, particles of light, and electromagnetic waves without color.

The new coin is being distributed in the USA by First Coin Company (www.firstcoincompany.com), which provides free worldwide shipping and will reimburse any import duties or fees international buyers could be assessed.  In Europe, the coin is available from Italian dealer, Powercoin (www.powercoin.it).

The coin is priced at $209.90 from First Coin Company and is expected to ship in March.

First Coin Company is offering Coin World readers a 4% discount code for both coins: 4future.  Just enter this code at the menu of your shopping cart by clicking edit.

The first coin, Artificial Intelligence, is still available for purchase from First Coin Company.  You can find both coins on this page: https://firstcoincompany.com/S/index.php?route=product/search&sort=p.model&order=DESC&filter_tag=CODEFUTURE

The speed of light

The speed of light is a key concept of modern physics.  According to Wikipedia: “The speed of light in vacuum, commonly denoted c, is a universal physical constant important in many areas of physics. Its exact value is 299792458 meters per second (approximately 3.00×108 m/s, approximately 186,282 mi/s); it is exact since the length of the meter is defined from this constant and the international standard for time.  According to special relativity, c is the maximum speed at which all matter and hence information in the universe can travel. It is the speed at which all massless particles and changes of the associated fields (including electromagnetic radiation such as light, and gravitational waves) travel in vacuum. Such particles and waves travel at c regardless of the motion of the source or the inertial reference frame of the observer. In the theory of relativity, c interrelates space and time, and also appears in the famous equation of mass–energy equivalence E = mc2.

Like the AI coin, the Speed of Light is sure to become a hit with collectors and with those who have a strong interest in science, technology, and futurology.  Future coins in the series with deal with topics such as virtual reality and robotics.