An ace in the hole 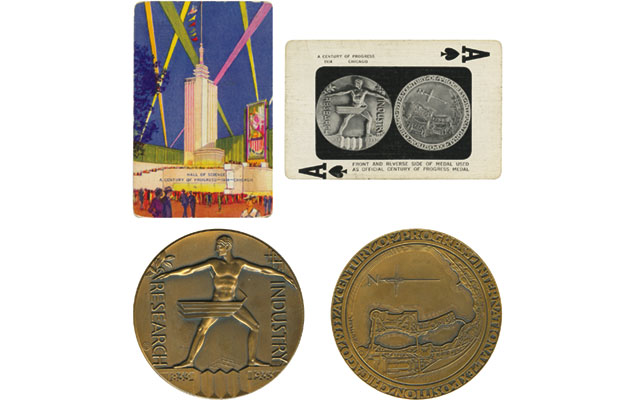 A playing card for the 1933 and 1934 Century of Progress Exposition in Chicago shows the official exposition medal, what collectors classify as a so-called dollar.

One of the reasons I love this hobby is that it intersects with so many disciplines.

Because numismatics involves so many facets of American history, art and culture, connections to broader stories may be found everywhere.

Consider a recent visit to an antique mall not too far from Amos Media headquarters in Sidney, Ohio. There I found a playing card from the 1933 and 1934 Century of Progress Exposition in Chicago, Ill.

What does a playing card have to do with our hobby?

Well, in this particular case, the ace of spades shows both sides of the exposition’s official medal, as designed by Emil Robert Zettler, a sculptor who headed the Industrial Art Section of Chicago’s Art Institute.

Zettler’s Art Deco design features on the obverse a male figure of energy and action, representing an intellectual arch between man’s resources and man’s work, with RESEARCH and INDUSTRY (the fair’s theme) in the field.

An aerial view of the 400-acre fairgrounds along the city’s southern shore of Lake Michigan graces the reverse of the medal.

Several versions were created, included one that qualifies as a so-called dollar. So-called dollars are a fascinating area related to coin collecting, with many of these medals sharing themes found on U.S. commemorative coins or having been created by famous artists, including some designers of American coin.

Coin World shared images of the playing card with Jeff Shevlin, the “so-called guy,” an expert on so-called dollars. Shevlin was unfamiliar with the card, but noted that many of the collectibles related to expos and “world’s fairs” such as this piece aren’t cataloged alongside the medals themselves. A total of 39 million visitors attended the Century of Progress Exposition, and many souvenirs were created to feed demand from the crowd.

The card is from several different decks issued for the exposition, and online auctions readily offer up examples of cards individually and complete decks. The $1 I paid is a fair market value for one card, and much cheaper than the medal itself.

In 2012, when Heritage Auctions sold Shevlin’s example of the medal (graded Mint State 65 by Numismatic Guaranty Corp.), it sold for $109.25.

Though the playing card is no ace in the hole, it is a perfect accompaniment to or substitute for the medal.