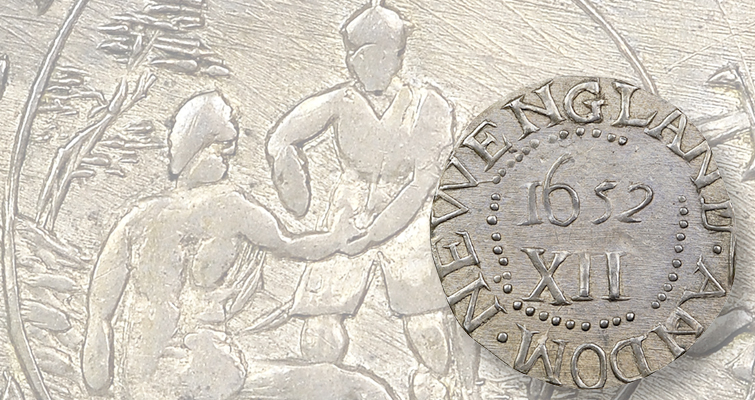 The 24th edition of the Red Book, cover-dated 1971, was the last to carry an entry for the debunked Good Samaritan shilling, on page 17, tucked between the Massachusetts Pine Tree Pieces and the Maryland coinage. 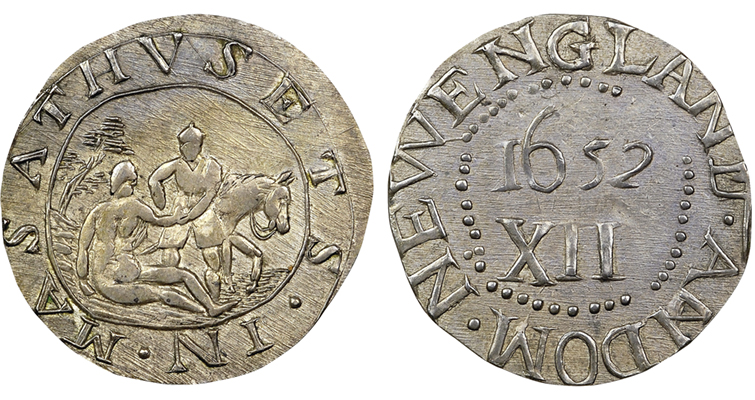 This NGC MS-65 Good Samaritan shilling is a 19th century fantasy produced by Thomas Wyatt. It fetched $4,935 at auction at the January 2015 FUN show.

The Red Book, in its 70th edition this year, has changed several times, reflecting research discoveries.

The Good Samaritan shilling, a famous 19th century fraud, might be the only coin to be delisted from the R.S. Yeoman's A Guide Book of United States Coins, the Red Book.

The “coin” was considered a great rarity in the 1940s and ‘50s. For the first dozen or so editions, the Red Book write-up described the piece:

“The Good Samaritan Shilling, supposed to be a pattern piece, was struck at a Boston mint and is extremely rare. This piece is of the same general type as the Pine Tree Shilling, but has a device illustrating the parable of the Good Samaritan on the obverse. It is in silver and dated 1652 on the reverse.”

Sylvester S. Crosby, in his groundbreaking 1876 work The Early Coins of America, acknowledged that some doubt the genuineness of the piece, but he was convinced it was a Massachusetts silver pattern. “I am to a considerable extent justified in regarding it as genuine, in the absence of anything like proof to the contrary,” he wrote.

In 1848 the British Museum purchased a Good Samaritan Shilling that was known to exist as early as 1730. The coin, Newman determined, was a Pine Tree Shilling on which the obverse had been ground off and replaced with the seal of the British Commission of Sick and Wounded, a 17th century precursor of the Red Cross. English coin dealer Thomas Snelling and American dealer Thomas Wyatt separately faked their own versions of the supposedly genuine coin and palmed them off on unsuspecting collectors.

The Red Book continued to list the piece for a few years after Newman exposed the fraud, but changed the text. “Although this piece was formerly thought to be a pattern for the 1652 shillings, recent findings show that the known specimens are all fabrications.”

While the piece has been debunked, it is still popular with collecting, fetching as much as $5,000 in recent auctions.