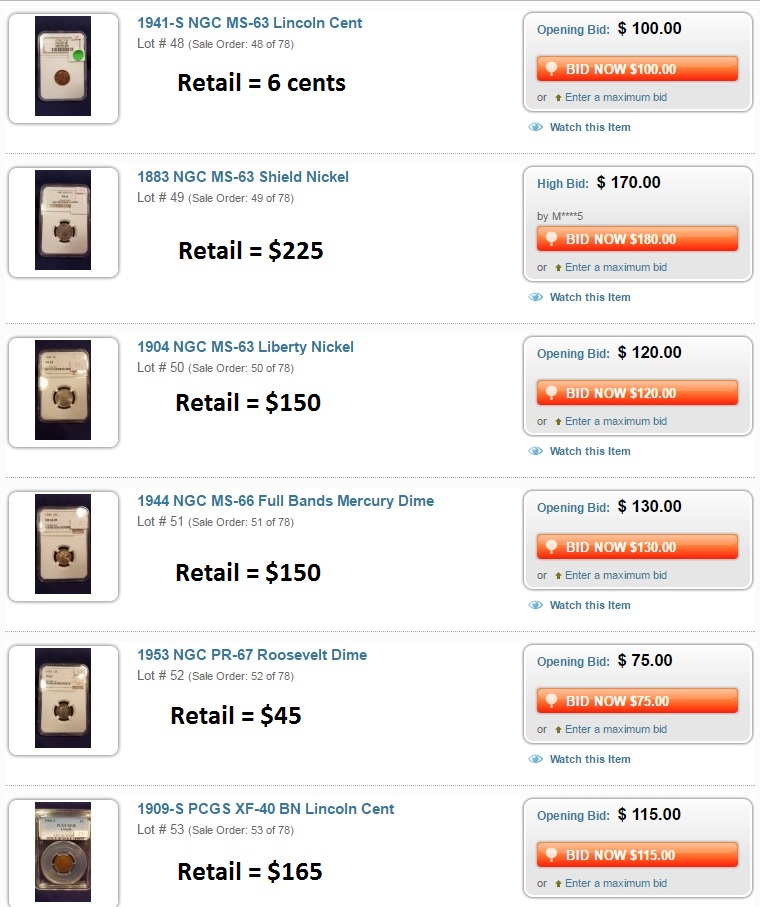 With the 18% buyer’s fee, these coins, which were advertised as having "no reserve" but had high "opening bids," actually are selling close to and over what their retail price would be. These are not bargains. 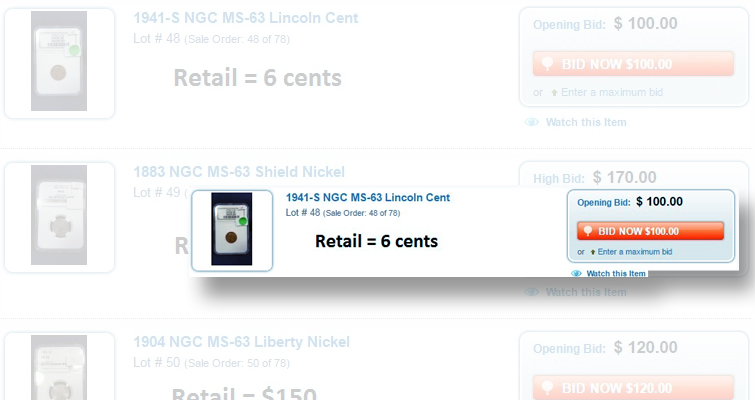 High opening-bid lots often attract the uninformed newbie who doesn’t know the difference between opening bids, reserves, auction values (as documented by PCGS and NGC on their websites), and retail prices.

Previous
Next
When browsing auctions of online portals such as Proxibid or HiBid, don’t let the promotional words “no reserve” in ads for an Internet session fool you into believing you may get coins below retail.

Take a close look at the photo above. I have listed the retail prices of opening bids in this slate of coins from Proxibid. Most egregious is the 1941-S Lincoln cent, MS-63 brown, which has a retail value of 6 cents and an opening bid of $100.

Another unfortunate example is the opening bid of $75 for a Roosevelt dime graded Proof 67 whose retail value is about $45.

Other examples from this sequence of lots are close to retail at the hammer price, assuming no one else bids on the lot; with the 18% buyer’s premium, they, too, are selling at, close to, or above retail.

Why do online auctioneers do this? In their defense, sometimes consignors demand certain reserves for coins, and nothing kills interest faster than the words “Reserve Not Met.” Often, when a bidder sees this, he or she just goes on to the next lot or auction.

So charging at or above retail to meet a hidden reserve is one way to counter that effect.

Also, if lots do not sell at the high opening bids, then Proxibid doesn’t charge for a percentage of the sale price.

The worst sessions to bid on, in my view, are auctions that tout “no reserve” and then open with retail bids. Those really are not auctions; they are online coin shops masquerading as auctions.

Then again, these types of high opening-bid lots often attract the uninformed newbie who doesn’t know the difference between opening bids, reserves, auction values (as documented by PCGS and NGC on their websites), and retail prices.

And we’re only talking about coins slabbed by top companies, such as PCGS, NGC, ANACS and ICG.

Pay no attention to grades assigned to raw coins or ones in lesser slabs. Those are often inflated on coins with problems, such as cleaning or tampering.

Because I mostly patronize PCGS, I go to PCGS Certification to see whether the coin is genuine and if so, from there, hit the link that goes to PCGS CoinFacts for the latest auction values.

You can do the same on the NGC site. Check an NGC certified coin’s certification here, and from there you can go to their values site as well.