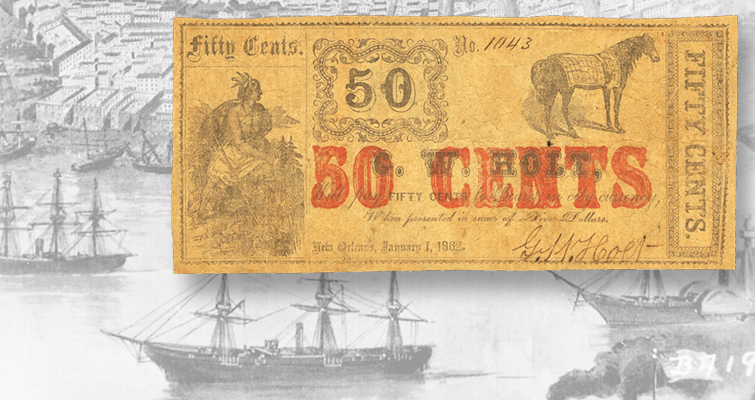 Coffeehouse owner George W. Holt, a prolific issuer of shinplasters, advertised a few weeks before the Union takeover that his bills were good. He maintained that “unscrupulous persons” had spread rumors so they could buy the bills at a discount to face value.

Paper money lost much of its purchasing power in early April 1862 as Union forces closed in on New Orleans. Confederate paper, private bank notes and shinplasters — notes worth less than $1 — formed the bulk of the circulating medium and traded more or less at par with each other.

Coins were scarce and the shinplasters that replaced them had a checkered history. Newspapers regularly railed against unscrupulous merchants who refused to redeem their small-denomination bills.

On March 28, the city’s Board of Provost-Marshals prohibited “the traffic in gold and silver against the Notes of the Confederate States of America” under threat of unspecified “prompt and severe punishment.”

Early April advertisements in The True Delta newspaper chronicled the city’s commercial life in the run-up to the city’s takeover.

A.J. Powell offered an $80 bounty to soldiers “who will enlist in Co. C., 10th Louisiana Regiment, now in Virginia.”

The Mississippi and Tennessee Railroad advertised tickets for the 24-hour run to Memphis at $14.50.

In court, the paper reported, six people “were severally sentenced to pay a fine of $5 or go the Parish Prison for 10 days, all for enjoying the glorious privilege of getting on a bender and sloshing around generally.”

On April 1, the provost marshals published a list of maximum prices that could be charged in the city’s markets:

Nonetheless, the black market apparently thrived as Union forces closed in on the city.

The True Delta reported April 20, “Those who have a fondness for eggs find them a rather costly luxury these blockade times. Just think of eggs commanding fifty cents per dozen.”

On April 23, the city’s Committee of Public Safety offered “rewards for the destruction, through private enterprise, of the armed vessels of the enemy threatening the coasts of Louisiana and Mississippi. Gunboats were worth $25,000, mortar boats $10,000 and larger ships, $50,000.”

Four days after the Union takeover, The True Delta decried the profiteering that followed in the U.S. Navy’s wake. “There are those who are disposed to take advantage of the deranged state or our markets by demanding exorbitant prices for what they have for sale. We have heard of instances where four prices have been asked for articles and specie demanded in exchange.”