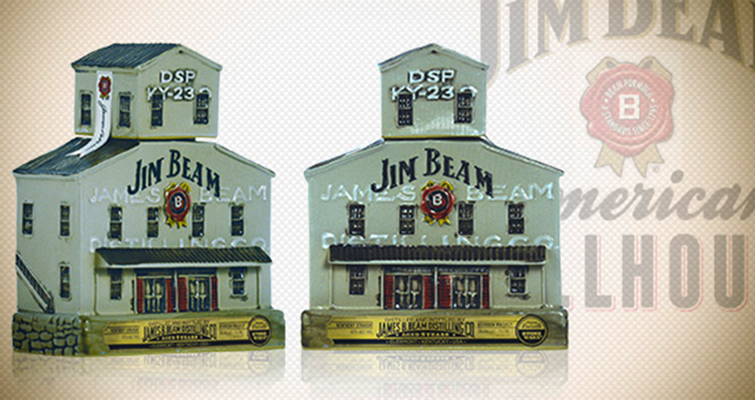 In 2012, Jim Beam issued this Jim Beam American Stillhouse decanter for $199.99. The bottle, which came filled with bourbon, was limited to an edition of 1,000. It was the company’s first decanter since production ceased in the early 1990s.

Jim Beam, now part of a Japanese conglomerate, has been making good booze for decades. The Beam family started making whiskey in 1795. After Prohibition the present James B. Beam Distilling Co. was formed to rekindle the family profession.
To push product, the company began selling alcohol in ceramic decanters 60 years ago. Some decanters were just decorative, often featuring a dog, and were produced solely to look good on the shelf behind the bar. Others commemorated events, such as Alaska statehood. Some were specially crafted for companies to give – filled, of course – to special clients or officials.
In the 1970s coin collecting and Beam bottle collecting briefly merged. Booze and coins seemed like a match made in heaven. Dealers started advertising Beam bottles in the pages of Coin World. Ads touted the investment potential. The star of the series was the 1964 First National Bank of Chicago decanter.

Michael Polak’s Antique Trader book Bottles Identification and Price Guide notes about that bottle, “Commemorates the 100th anniversary of the First National Bank of Chicago. Approximately 130 were issued with 117 being given as mementoes to the bank directors with none for public distribution. This is the most valuable Beam Bottle known. Also, beware of reproductions. “
Prices for that genuine rare piece have been all over the place, reaching several thousand dollars during the Beam bottle collecting heydays of the 1970s.
In June, a First National bottle with a “firing flaw” sold for $588 on eBay. The seller maintained he had recently sold an unflawed decanter for $1,200.
Beam bottle collecting started to wane in the 1980s, about the time ads ceased appearing in Coin World. Today most bottles go for just a couple dollars apiece, when they sell at all.
Author Darryl (no last name given) writes on World Collectors Net, “What caused this demise in the hobby? I think there are a few factors that went into this. The distillers were having such success at making decanters that they continued to make more and more each year. They actually flooded the market with bottles. Buying these bottles new from your local liquor store was not cheap. The new decanters cost far more than the standard off-the-shelf bottles. I started out by collecting Political bottles. I remember paying $89.00 each for the last Politicals in 1988. Today these bottles aren’t worth half that. It all comes down to supply and demand.”
Next: Put it on the wall