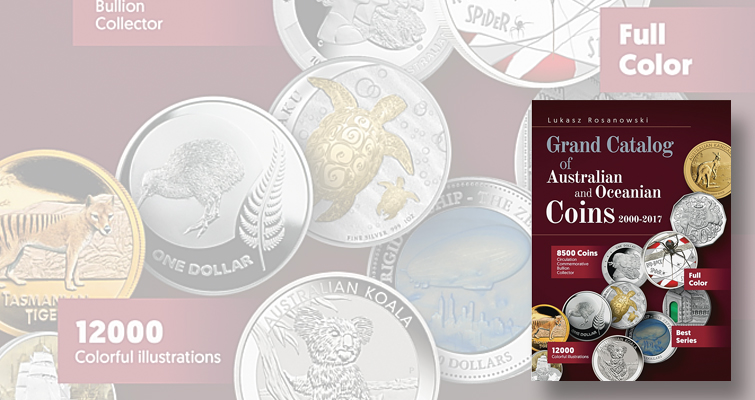 'Grand Catalog of Australian and Oceanian Coins 2000-2017' by Lukasz Rosanowski, of Poland, took three years to produce and covers 9,000 circulation, commemorative/collector and bullion coins in 357 pages and has 14,000 color illustrations, showing both sides of each coin in most cases. It is a high-quality, hardback book and will undoubtedly be a very useful reference. 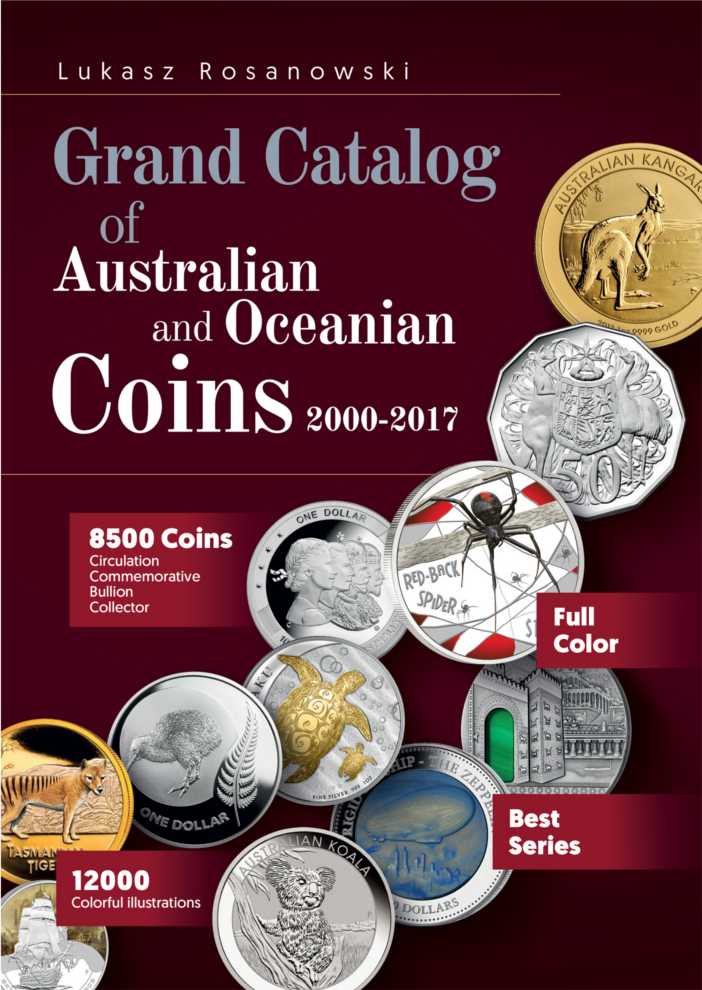 Previous
Next
This week I’d like to highlight another recent reference book on modern world coins called Grand Catalog of Australian and Oceanian Coins 2000-2017. The book, which came out earlier this year and took three years to produce, is by Lukasz Rosanowski of Poland, who was aided by two market analysts.

It covers coins issued since 2000 by Australia, New Zealand, and the numerous countries of the Pacific region such as Niue, Cook Islands, Palau, and Tuvalu, which are well-known for the myriad coins produced by mints in other countries on their behalf through licensing arrangements.

Those arrangements not only produce revenue for these countries (and unfortunately probably also raise the retail price of the coins), but they also make it possible to provide collectors with an amazingly diverse and innovative universe of coins produced with cutting-edge minting techniques, typically issued in small numbers.

The book calls these coins “the most beautiful and the most elitist coins in the world.” Some people less enamored with this area of numismatics derisively refers to it as “circus coins” and say there are too many such coins. They also note that many have declined from their issue price, but that view overlooks some important facts.

One is that many others of these coins have been among the best secondary market performers. I recently saw an eBay sale for a 2-ounce Lunar gold coin from the Perth Mint issued in 2008 that sold for over $14,000, or around seven times its original price. Second, as Mik Woodgate of AgAuNews noted, some of the most impressive coins of recent years, such as the Tiffany Art series, would not exist if these countries had not gone into this field. Third, collector coins are not intended as investments, though will careful study it may be possible to identify those that are more likely to increase in value.

The book covers 9,000 circulation, commemorative/collector, and bullion coins in 357 pages and has 14,000 color illustrations, showing both sides of each coin in most cases. It is a high-quality, hardback book and will undoubtedly be a very useful reference for collectors.

It is organized into three sections: coin series, which may include pieces from different countries; bullion coins of all metals; and countries, which lists the circulation and collector coins issued by the broad range of countries covered.

For each coin or set the following details are provided: face value, country of issue, metal, weight, size, quality, mintage, date of issue including the month, and in most cases either issue price or retail value as of March 2017, except for the bullion coins since their price is tied in part to fluctuating precious metal prices.

My one quibble is that the print and the color images are rather small, but that is undoubtedly because so many coins are covered. Plus, enlarging the images and larger print would have added many pages and made the book heavier.

Since the series and countries sections overlap, perhaps in the next edition there could be just one section of collector coins, one on bullion, and a third on circulation pieces.

The only other book I am aware of that covers some of this material would be the Standard Catalog of World Coins 2001 to Date from Krause, but the Rosanowski volume is much more comprehensive in its scope and in the details provided on each coin, features color, rather than black and white images, and has more updated pricing information.