?Fake and/or questionable lots have consequences 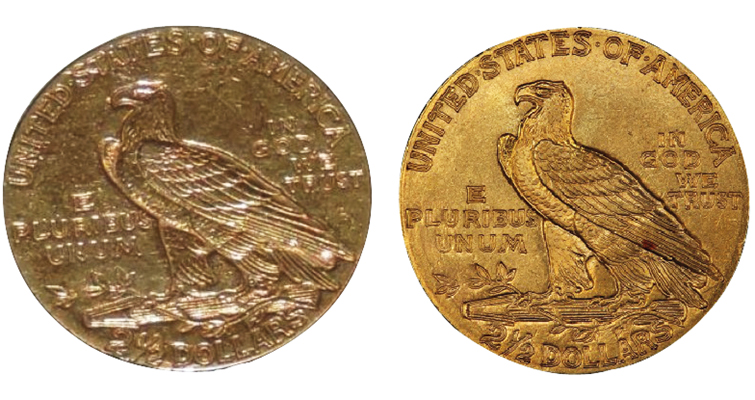 One of the biggest risks of bidding on raw coins in online auctions is the presence of counterfeit coins in a venue in which auctioneers believe all sales are final.

All sales are not final when it comes to counterfeits, but convincing sellers of that can be a long process, especially if you are bidding in a portal that lacks dispute resolutions or are dealing directly with an auction house.

In both of those cases, the coins were withdrawn from auctions.

I reported the above 1911 $2 ½ Indian Head coin via Proxibid and asked that it be weighed for authenticity. At this writing, it was still being offered as authentic, without any weight verification. (Quarter eagles weigh 4.18 grams.)

In 1908, the designs of the quarter and half eagle gold coins were minted below the field, a process known as “incuse,” or “punched in.” Take a close look at the incuse of the coin depicted above, left side, particularly the eagle’s wing, which looks crudely cut out.

The coin hasn’t been taken down. I understand the reluctance, especially if the seller has to deal with a consignor who may not want to know about authenticity.

Nonetheless, there are consequences when sellers do not verify that a coin is genuine. This auction had many other raw and rare coins that I would have bid on, had not this suspect coin appeared. It made me suspect other coins might be fake, so I did not bid at all.

True, I am only one bidder. But other knowledgeable buyers are also viewing these lots. There is a general rule that experienced hobbyists follow: If one coin from a consignor is fake, chances are other coins the same consignor may be as well.

Bidding on raw coins requires keen numismatic skills driven by a healthy dose of skepticism. For instance, I look for flaws and stop bidding as soon as I find one, as I wrote about in this CW post.

Never take a chance in an online auction that the seller’s description is accurate. Do research, read numismatic books and magazines, and buy graded coins from PCGS, NGC, ANACS and ICG until you can make informed decisions about uncertified lots.