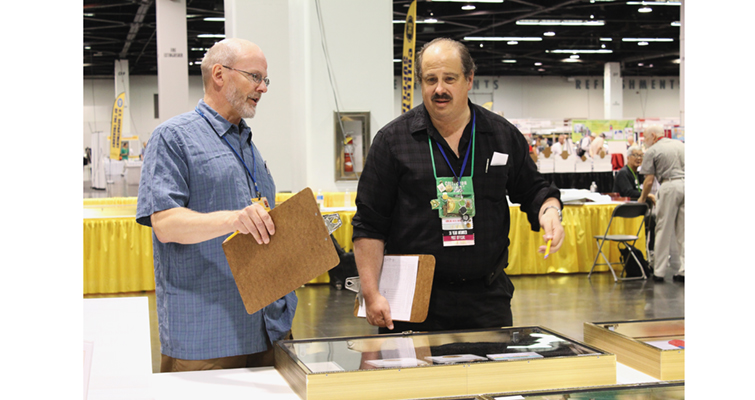 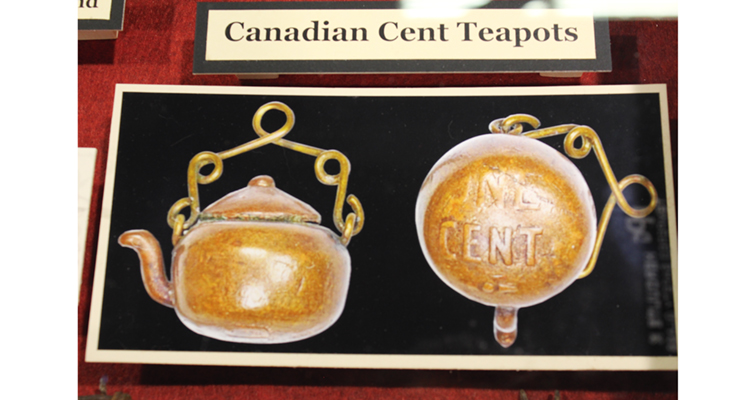 One of the most intriguing display exhibit entries at the 2016 ANA convention in Anaheim featured cent coins turned into objets d’art, prisoner folk art. Inmates at ta Canadian prison created these miniature teapots from Canadian cents. The teapot at right is positioned to show the coin's ONE CENT legend preserved on the tiny teapot bottom. 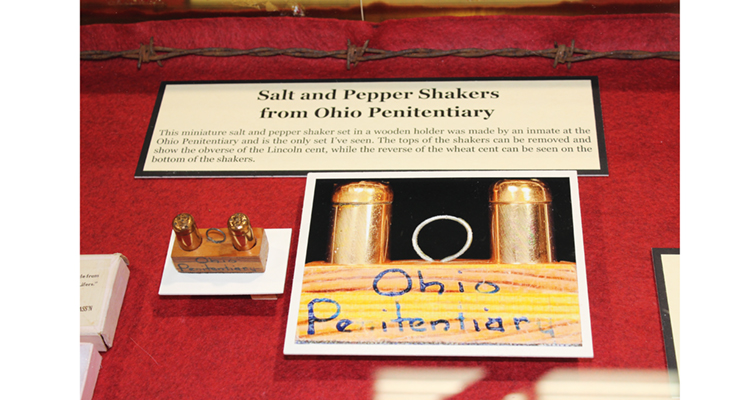 Among the intriguing display exhibit entries at the 2016 ANA convention in Anaheim were these cent coins turned into objets d’art, prisoner folk art. Inmates at the Ohio Penitentiary turned a pair of Wheat cents into this pair of salt and pepper shakers.

When you go to a coin show and look at coins, it’s to buy them, right? That seems like a ridiculous question, but the answer isn’t so cut-and-dried.

One of the simple pleasures of attending many major coin shows is to see collector exhibits. These cases are full of interesting presentations of numismatic material, sometimes in unconventional combinations, but always with an educational flair.

The collector exhibit during the ANA World’s Fair of Money in Anaheim is no different. Although the number of exhibits is down from recent years, the distance to travel and location outside a central air hub seem like likely culprits.

Still, the exhibits that are here include some fascinating topics of the broadest manner. You can learn about prisoner of war scrip or Austria’s colorful silver-niobium coins. Coins of the Pope and the medals of the French Revolution are contextualized with contemporary events and images. Magnifiers at some displays like the Gods & Goddesses on ancient gold coins allow for closer inspection, especially important on these smaller objects.

Connecticut coppers are fascinating enough – coins from America’s colonial days have an alluring cachet as it is! – but then to see error versions of these historical nuggets adds a whole new dimension.

A special category is tailored to the location, so one exhibit features a real life princess, Hollywood and Monaco’s Grace Kelly, while others highlight elongated cents available at Disney parks.

One of the most intriguing entries features cent coins that have been turned into objets d’art, prisoner folk art. Inmates at the Ohio Penitentiary turned a pair of Wheat cents into a pair of salt and pepper shakers. This phenomenon extended to prisoners in other countries, too, as witnessed by miniature teapots created from Canadian cents.

Visitors to the show can still cast a vote for the People’s Choice Award, but if you can’t make it to Anaheim this time around, be sure to plan some time at the next major coin show to see these passion projects. And you’re sure to learn something too, and enjoy these objects in a whole new way.