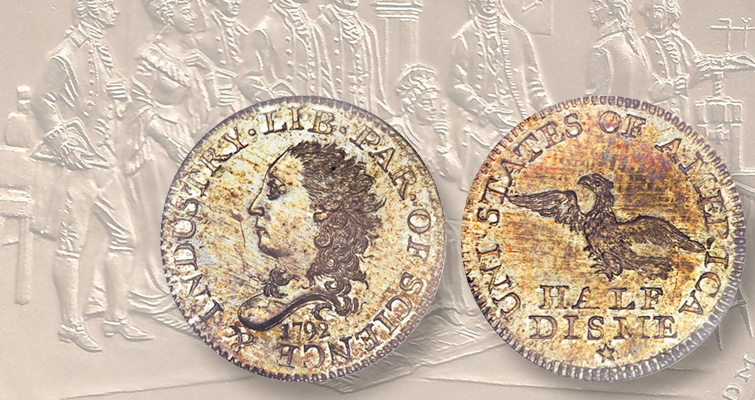 Were George and Martha Washington present when the 1792 half dismes were struck? The scene is imagined in John Ward Dunsmore’s 1914 painting “Inspecting the First Coinage” and on the Mint’s 1992 bicentennial medal.

Original images courtesy of Heritage Auctions and the author. 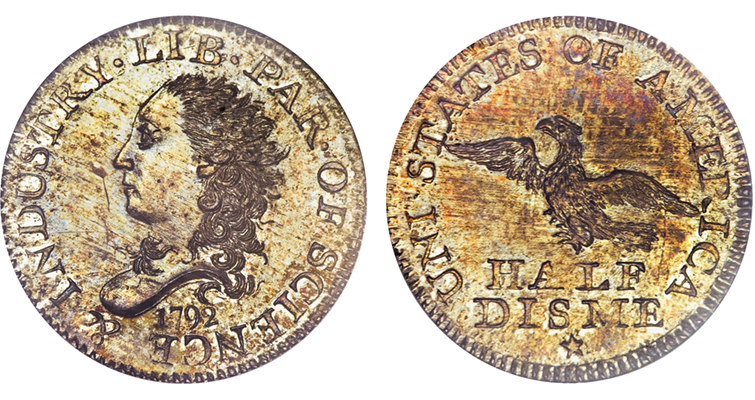 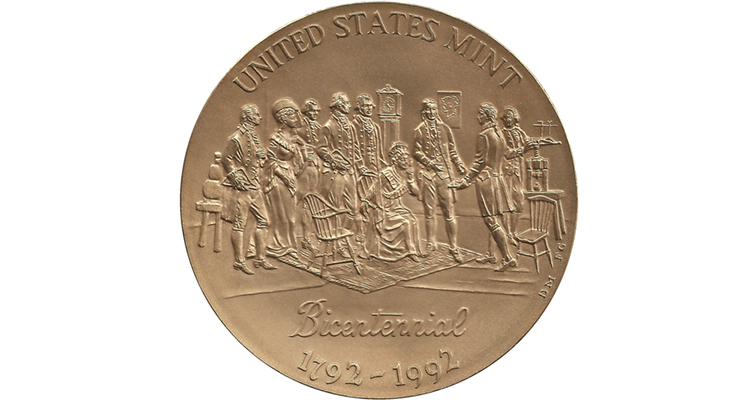 Smithsonian curator Richard Doty said of the striking of the first half dismes:"I think the Washingtons would have wanted to be there for the occasion." The event, real or not, is depicted on John Ward Dunsmore’s 1914 painting “Inspecting the First Coinage,” repeated on the Mint’s 1992 bicentennial medal.

The United States was a new nation, not yet 20 years old, when the U.S. Mint set up temporary shop in the cellar of a Philadelphia saw factory in the summer of 1792 and began striking tiny silver coins in the name of the United States of America.

Despite the lack of documentary evidence, the late Richard Doty, Smithsonian Institution senior numismatic curator, believed George and Martha Washington were present when the 1792 half dismes were struck.

"To do your own coinage," Doty told me years ago,"I think the Washingtons would have wanted to be there for the occasion." The event, real or not, is depicted on John Ward Dunsmore’s 1914 painting “Inspecting the First Coinage” and on the Mint’s 1992 bicentennial medal.

The half disme shows Liberty on the obverse and a scrawny eagle on the reverse. The words UNI STATES OF AMERICA arch above the eagle.

In his annual message to Congress that year, Washington discussed the Mint and mentioned its “small beginning.”

He said, "In execution of authority given by the legislature, measures have been taken for engaging some artists from abroad to aid in the establishment of our Mint. Others have been employed at home. Provisions have been made for the requisite buildings, and these are now putting into proper condition for the purposes of the establishment. There has been a small beginning in the coinage of half dimes, the want of small coins incirculation calling the first attention to them."

Those half dismes, with their archaic spelling of the word dime, cramped lettering and intimate connection to George Washington occupy a special place in the hearts of collectors. Even battered, holed and badly worn pieces will fetch $10,000.

Legends that have grown over the centuries increase the coin’s desirability. By some accounts, the coins show Martha Washington on theobverse and were struck on silver provided by George Washington himself.

Congress originally wanted a portrait of George Washington on the nation’s coins, but he rejected the idea as too monarchical — althoughthe legend persists that Martha Washington was the model for Liberty.

The silver, some believe with good reason, came from melting down the president’s tableware.

In 1844 an aging Adam Eckfeldt, chief coiner in 1792, reportedly said the coins were struck expressly for Washington on silver he provided in bullion or coin.

Next: The first nickel nickel