?A Guide Book of the United States Mint 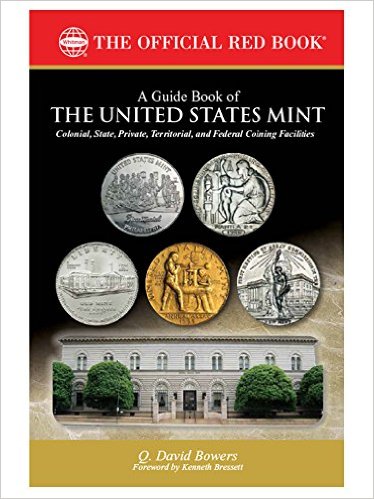 From Q. David Bowers and Whitman Publishing, “A Guide Book of the United States Mint” is a book that belongs in the library of any serious collector of U.S. coins, and reading it will enhance your enjoyment of the hobby and of your coins.

There is an extensive library of books and other published materials on the United States Mint, but there has never been a single authoritative reference book on the Mint and all its branches. Nor has one previously existed that covers both the original Mint in Philadelphia that was founded in 1792, and the modern, post-1872 Mint under one cover.

But Q. David Bowers, the most well-known numismatic writer in the country, has written a remarkable book that fills this important gap. A Guide Book of the United States Mint is the 23rd volume in Whitman’s award-winning Official Red Book series of guide books on specific coin series, also known as the Bowers series, and explores a rich treasure trove of information that exists on the U.S. Mint going back to colonial times.

Combining research and interviews he has been conducting since the 1950s with the latest information from electronic sources and tons of information no longer available in published form, this impressive new work provides what publisher Dennis Tucker calls “a landscape painting of the U.S. Mint stretching back to colonial times but also as close as today’s dimes and quarters jingling in our pockets.”

The book’s publication is also very well-timed since the Mint is celebrating its 225th anniversary in 2017, which kicks off with the January 12 official unveiling of the 2017 American Liberty $100 gold coin design. This coin will be struck in high relief and features a depiction of Liberty as a young African-American woman wearing a coronet of stars. No official photos have yet been released of the coin, which is expected to be released in April.

The Mint also plans to issue other products to mark the event, including silver medals of the same design as the Liberty gold coin and the first-ever reverse enhanced uncirculated coin set.

The book covers the history of over three dozen Mints in the U.S., including colonial, state, private, territorial, and Federal coin facilities. It includes almost 1,300 photos and other illustrations and provides a “you are there” behind-the-scenes look at modern Mint facilities that draws on numerous visits the author made to the branch Mints that exist today and some of those that are no longer in operation.

In addition to the detailed chapters on all those Mints and the coins they produce that reflect the author’s deep interest in America history, Bowers also includes appendices on collectibles dealing with the Mint, data on every past director of the Mint and the superintendents of branch Mints, and much more.

This is a book that belongs in the library of any serious collector of U.S. coins, and reading it will enhance your enjoyment of the hobby and of your coins.