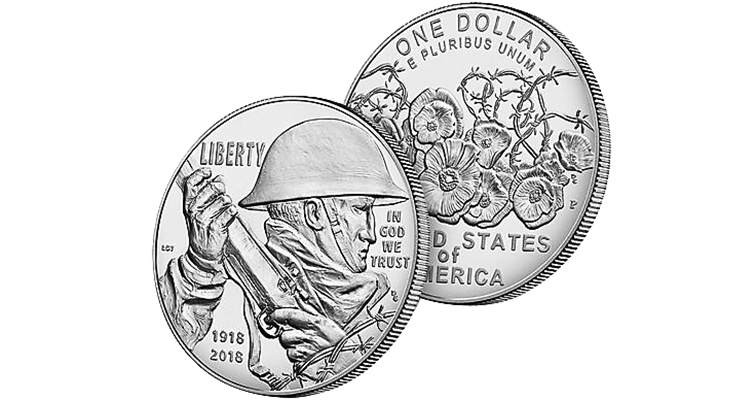 The 2018 World War I Centennial silver dollar is likely to sell better than the 2017 commemorative dollars did, but will probably not sell out of its maximum authorized mintage of 350,000 coins.

There is a tradition started by several numismatic publication editors, including Coin World’s Bill Gibbs and Numismatic News’ David Harper, of posting their predictions for the hobby at the end of one year for the coming year.

In that spirit and with all the usual caveats that go with making predictions, I offer my own for 2018’s U.S. Mint products.

The recent trend of “lower lows” in U.S. Mint precious metal coin series will continue for some and will not for many others. Overall, I expect sales to be stronger than in 2017.

For example, the World War I Centennial dollar and Breast Cancer Awareness commemorative coin programs will both sell much better than the two 2017 commemorative programs, Boys Town and the Lions Club.

It is also worth noting that this means collectors of modern U.S. coins will embrace the first colored gold coin from the Mint, the $5 rose gold coin.

And, while the World War I dollars will not sell out, the Armed Forces medals, limited to 100,000 and paired with the dollar coins in five sets, will sell out despite a marketing approach that has received a lot of criticism.

In addition, the 2018-S American Silver Eagle Proof coin will sell more units than the 2017-S version of this coin, despite the announcement of a slight price increase for these coins, which will cost $55.95 each compared to $53.95 for the 2017 coins.

Sales of and demand for the bullion versions of the American Eagle gold coins of various sizes and the 1-ounce silver dollars will increase, because investors in these areas tend to buy more when prices are rising (despite the fact that it is more economical to buy when prices are declining).

I also predict that the Proof 2018 American Liberty tenth-ounce gold coin will sell out, provided the mintage is not more than about 100,000 units.

Overall interest in slabbed modern U.S. coins will decrease as prices for 70-graded examples decrease and more buyers learn than it is often easier to sell coins in their original packaging.

Sales of the collector versions (with a P Mint mark) of the America the Beautiful 5-ounce silver quarter dollars will continue to decrease as the number of collectors willing to stick with the series diminishes, but sales of the bullion coins, which are about $50 less per coin, will remain stable or even increase.