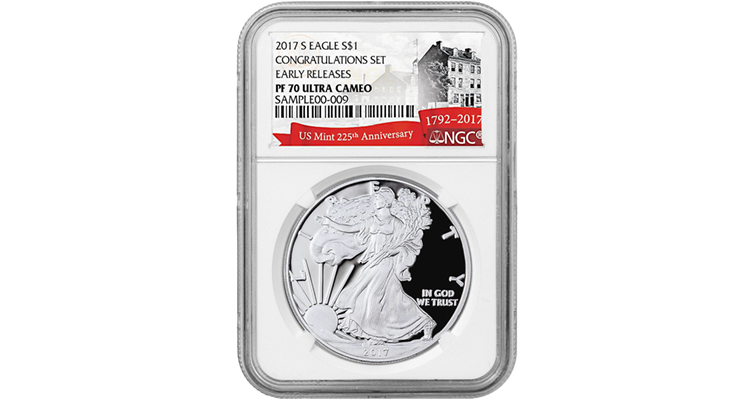 NGC and PCGS-graded coins graded as perfect, in NGC's case Proof 70 Ultra Cameo, continue to bring in the neighborhood of $250, which is a nice return for those who are selling them.

In the weeks since the April 4 release of the 2017 Congratulations set that includes a Proof 2017-S American Eagle silver dollar, many buyers have reported in coin forums that their orders have still not shipped.

Even some large coin dealers’ orders seem to have been delayed. I noticed, for example, that APMEX says its sets will be available on April 28, while graded examples are coming in May.

I ordered a couple and was fortunate to have them ship the next day.

The Mint has not announced why, almost a month after the release, many orders have not been shipped. Given the length of the delay, it seems at least possible, if not likely, that not all of the 75,000 coins were struck in advance of the release of the coin.

It is also puzzling, as others such as Bill Gibbs have suggested, why the Mint did not impose any household order limits, something which has been done in the past when a high-demand item was launched.

There is no way to accurately gauge what percentage of 2017-S coins have yet to hit the market, but a substantial number will presumably be doing so in the coming weeks.

How that may impact the market for both ungraded and graded pieces will be interesting to observe.

It is also interesting that, unlike the typical pattern in which items that sell out quickly at the Mint peak early, these sets started off on eBay after the 2-minute sellout at $120 and now bring $150-160. Whether that increase is a function of the delayed orders, or of something else, is not clear.

So far, auction and retail prices for examples graded Proof 70 have held on to their premiums, which vary by label. With the exception of hand-signed John Mercanti labels, first day of issue labels, etc., NGC and PCGS-graded coins at this grade continue to bring in the neighborhood of $250, which is a nice return for those who are selling them.

Many of the sales on eBay of these coins are presales, though some companies and other sellers have coins in hand that are shipping.

We may see some decline in prices as more coins hit the market, but it is the overall mintage of the coin that will shape longer-term values, which will be determined by how many 2017 Limited Edition Proof Sets are made available for sale.

And as I discussed in my previous piece, it is likely the 2017-S will remain the second-lowest proof coin of the series and one of the lowest for the entire series.