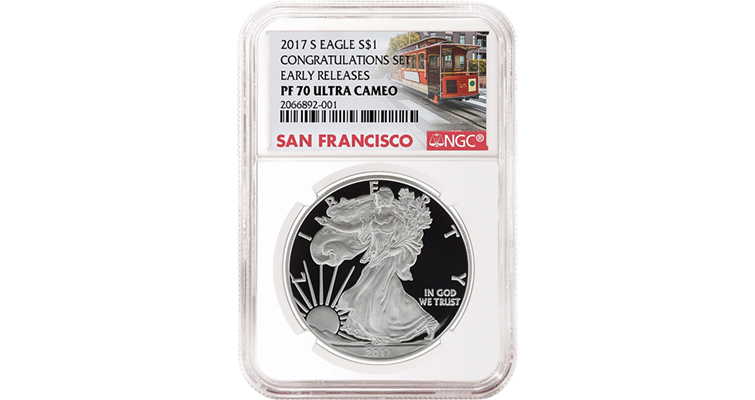 NGC offers a special San Francisco Trolley label at no extra charge for 2017-S Proof American Eagle silver dollar coins from the Congratulations Set submitted for grading. You need to submit the coin in its original packaging to be eligible for this offer and for Early Release labels.

Last week the U.S. Mint sold out of the 2017 Congratulations set in two minutes, as reported in Coin World, though so far the Mint has not released any sales data for the product. When released, that number will provide a partial clue as to whether any additional sets will be offered later once the order reconciliation process is complete.

The reason for the instant sellout is, of course, the inclusion of a Proof 2017-S American Eagle silver dollar coin minted in San Francisco, the first Proof from that Mint facility since the 2012-S coin.

When the American Eagle silver dollar coin program debuted in 1986, all bullion pieces were struck at the San Francisco Mint and continued to be until 1998, while Proofs were issued at this Mint from 1986 through 1992 and then again in 2011 and 2012.

As was the case in 2012, when the Mint sold the Proof silver American Eagle from San Francisco in two different products, the 2017-S will, as the Mint made clear before the launch of the Congratulations product, also be offered later in the year in the 2017 Limited Edition Silver Proof Set.

Those sets have struggled in recent years to sell their full mintage of 50,000 units, but the inclusion of the 2017-S means this year’s set will likely also sell out quickly. But what is not known is whether the 2017-W Proof American Eagle will also be included; if it is, the retail price would approach $200, a high price point for many collectors.

It is likely the mint will offer more than the usual 50,000 units of the LESPS this year, possibly doubling the offering to 100,000.

The conventional wisdom seems to be that this means the 2017-S is really no big deal.  But what has not been discussed is the fact that even if the LESPS mintage were doubled, the 2017-S will still be the second-lowest mintage regular Proof finish coin of the series, after the coveted 1995-W, and the lowest-mintage Proof of the series from San Francisco.

However, the picture changes a little if one groups Proofs and Reverse Proofs together.  In that case the 2017-S would come in third overall, after the 1995-W and the 2011-S Reverse Proof, or second for San Francisco Mint Proofs.

An additional point to consider is how many collectors will want to buy the LESPS just to get the 2017-S when they can buy the Congratulations set now on the aftermarket for around $120 and still also have the only coins eligible for First Strike and Early Release labels.

Yes, those labels don’t actually mean the coins were made first, but the market still continues to pin higher value on coins with those labels.

Finally, consider the current retail prices for Proof 70 graded examples of the 2017-S, which have moved up in the past week from $200 when the sets first sold out, to a range of $220 to $240 this week, depending on the label on the coin.

Those prices may go down later as more coins hit the market, and their future value is hard to say, since it will depend on the final mintage and the number of coins in that grade.

But it is likely to be more than the current $120 value for the sets, since a Proof 70 from the West Point Mint sells for close to that amount, and it has a much higher mintage.

The silver American Eagle is the most widely collected modern U.S. coin series, and the Proof version is the most popular annual product from the Mint, with the West Point Proofs typically selling in the million-coin range in recent years.