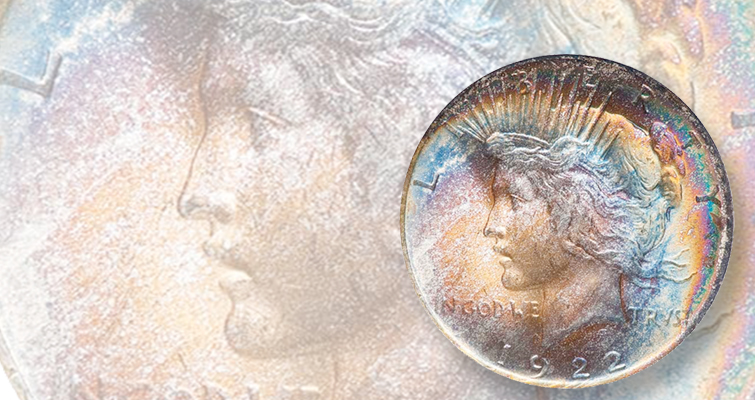 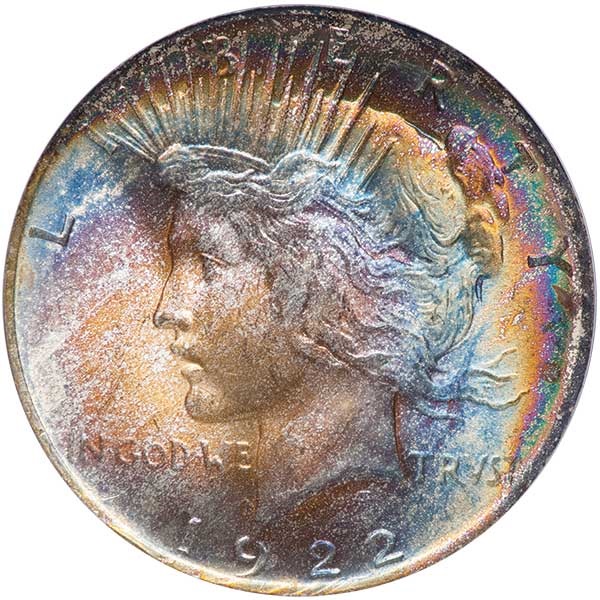 Peace dollars do not tone the way Morgan dollars do, in fantastic rainbow and circus colors. So any Peace dollar that contains rainbow toning, like the one that sold for almost $9,000 at Legend’s Regency Auction XXV, is sure to attract bids.

“You have likely NEVER seen a Peace dollar of any date toned like this! At the top of the obverse a narrow band of rainbow iridescence then blends to wider bands of violet, gold and light blue. The luster is about as brilliant as can be expected for a 22 Peace and the strike sharp and complete throughout. …”

Impurities in silver can trigger patina. Some 270 million Morgan dollars were melted according to tenets of the 1918 Pittman Act, with about 11 million melted silver dollars used to generate U.S. coinage, including Peace dollars. Perhaps that mixture had something to do with general lack of toning in the 1921 to 1935 series.

But as an observer of online auctions, I can tell you that, for the Peace dollar, the issue most likely to tone well is from 1922. I have seen several, though not as spectacular as the Legend coin. I even own a toned MS-65 1922 example, which you can view here.

You can usually find toned Peace dollars in online estate sales, especially if those coins were kept in albums. I just won two 1922 coins and one 1923 in such an auction for less than $200, and PCGS just slabbed them at MS-63 and MS-64. Though not as lovely as the Legend specimen or my gem 1922 coin, these surely will bring a premium when I consign them in auction, especially since they will have TrueView imaging — a good investment if you keep your coins in a bank box like I do.