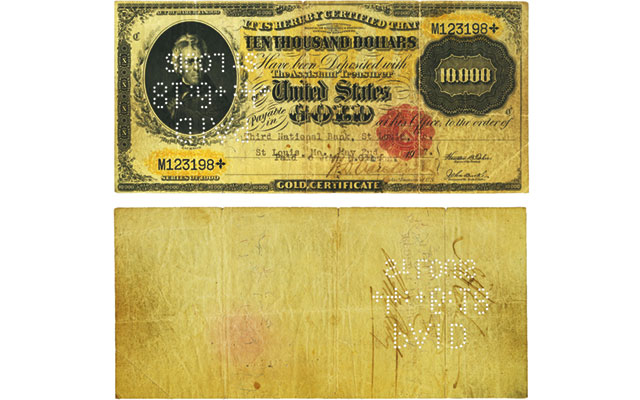 Gold certificates, like this cancelled Series 1900 $10,000 gold certificate sold for $1,938.75 in a Heritage Auctions online auction that ended Nov. 11, were required to be turned in to the U.S. Treasury after the Gold Reserve Act of 1934 took the U.S. off the gold standard.

Because gold is durable and highly malleable, it can be hammered into almost any shape and precisely divided into any size or unit of weight. Since it can be stamped into coins of a precise weight, the values of all other goods could, in the early days of gold coinage, be measured in terms of units of gold. Eventually gold became the absolute standard of value.

Although gold is very dense, its high value compared with its weight and bulk increased the risk of its being stolen. Nevertheless, by the 16th century and even much later, some gold-holding citizens kept their fortunes of gold in their own houses. But most people eventually became accustomed to leaving their gold for safekeeping in the goldsmiths’ vaults, where it was well protected. The goldsmiths would issue a receipt for the gold received.

Before long, gold-holding citizens realized it was much easier, when it came time to make a purchase or pay a debt, to simply issue an order to the goldsmith to pay over the gold to whomever they owed, rather than to transfer the gold itself. The recipient of the order, again, might find it easier to leave the gold he was to receive at the goldsmith’s and in turn issue orders to the goldsmith to pay specific amounts of gold to still a third person. Thus, all these monetary transactions took place without the actual gold leaving the goldsmith’s vault. This was the origin of bank notes and checks.

As this new paper money began to circulate on its own, goldsmiths discovered they could issue paper promises that exceeded the value of the gold in their vaults. Since this made the medium of exchange more abundant, trade flourished as the amount of money increased to meet its needs. When paper money became too abundant and exceeded the goods available in the market, it was withdrawn from circulation and exchanged for gold; when paper money became too scarce, gold was returned to the banks and exchanged for its paper representative.

The goldsmiths were gambling that everyone would not demand their gold at once. This was a good risk, and in nearly every country, these new banks went on expanding their credit until the amount of bank note and demand deposit liabilities, that is, the amount of paper money, was several times the amount of gold held in the banks’ vaults.

For centuries this alternating appearance (when paper money was cashed in) and disappearance (when gold was exchanged for paper money) of gold was the only stabilizing factor in a radically fluctuating market. Paper notes were issued freely by goldsmiths, moneychangers, merchants and bankers. No government could control the system; gold was the only stabilizing influence on the market. As the international monetary system became more complex, more and more governments used this traditional method of balancing and stabilizing international trade and backing up domestic currency with gold.

From these origins came the gold standard. First adopted by Great Britain in 1821, it was the system under which governments issued paper money that was backed by and exchangeable for gold. The amount of money circulating in a country depended upon the amount of gold it had.

The gold standard had several advantages. Since governments couldn’t legally increase the money supply without obtaining more gold, citizens were theoretically protected from politically attractive, printing-press inflation. The threat that people would demand gold for their paper tended to act as a damper on politicians.

The gold standard was also supposed to keep a nation’s payments to, and receipts from, foreigners automatically in rough balance. Suppose a country bought from foreigners, or imported, more than it exported over a long period. The country would pay out much more gold than it received, which would reduce the amount of money circulating at home. A smaller money supply would, in turn, tend to reduce the prices of things the country produced. Lower prices would make the country’s goods and services more attractive to both foreign and domestic buyers. This would encourage purchases by foreigners, or exports, and discourage purchase from them.

Since everyone accepted gold as a medium of exchange, the gold standard also tended to create certainty in international trade by providing a fixed pattern of exchange rates, that is, the rate or price at which the currency of one country is exchanged for currency of another country.

However, since the money supply depended on the amount of gold a country had, less money in circulation could mean less domestic business and more unemployment. In other words, the gold standard may not allow enough flexibility in the supply of money. In addition, since it provided a fixed pattern of exchange rates, the gold standard made it difficult for any nation to isolate its economy from depression or inflation in the rest of the world.

Most major nations of the world had adopted the gold standard by the 1870s. The United States was one of the last, officially adopting it in 1900.

Some countries at this time were using a close relative of the gold standard, the gold exchange standard. In this system, gold was not exported or imported at all. One country would offer to buy and sell the currency of another gold-standard country at a fixed price in the paper currency of the country making the offer. This was much cheaper than the full gold standard since the expense of transporting the gold was eliminated.

World War I spelled an effective end to the gold standard. War-induced inflation caused most nations to change to inconvertible currency or to restrict gold export.

At any other time the gold standard might have supplied its own automatic corrective: inflation at home would have meant that gold, in itself, was a more profitable export than goods, and a partial drain of gold abroad would thus normally have resulted in a contracted volume of money at home, making it necessary to reduce imports until a balance of trade had again been reached by an intensification of cheaper exports.

However, the expense of war caused Great Britain and other countries to spend gold profusely to buy arms from the United States.

At the end of World War I, all currencies were inflated and there was a severe shortage of gold worldwide. Most of the world’s stock had gone into hiding; half of it was in the United States reserve, and the rest was in private hands. Inflation had driven the cost of gold mining up until it approached and sometimes exceeded the official price of gold. Convinced a return to the gold standard would solve the world’s monetary ills, the nations of the Atlantic trading community agreed to return to the gold standard in the 1920s.

The stock market crash in 1929 killed this last effort to remain on the gold standard. In 1931, Britain went off the gold standard after using up its gold reserve in an attempt to defend its overvalued pound.

When President Franklin Roosevelt signed the Gold Reserve Act of 1934, the United States officially abandoned the gold standard. The dollar was no longer convertible to gold and gold could not be exported. The government prohibited the manufacture of gold coins, the private hoarding of gold and the use of gold as money or in lieu of money.

Rare and unusual gold coins, including those made before April 4, 1933, were exempted from delivery to the U.S. Treasury, including U.S. and foreign coins. All other gold coins, gold certificates and gold bullion were required to be turned in to the Treasury.

At the same time the secretary of the Treasury issued a public announcement that, beginning Feb. 1, 1934, the Treasury would buy all gold delivered to any U.S. Mint or any Assay Office in New York or Seattle, at the rate of $35 per fine troy ounce. An exhausted nation in the depths of a depression jumped at the offer. Wedding rings, gold plates and jewelry poured into the Treasury. By the end of 1934, gold was coming into the Philadelphia Mint at the rate of $1.5 million worth a month.

In October 1933, President Roosevelt announced he would establish a government market for gold, and on Jan. 31, 1934, he froze the price at $35 an ounce, thereby devaluing the dollar 40.94 percent. The result was a literal flood of gold pouring into the United States from foreign countries. The onslaught of gold made the government realize it had nowhere to put it, so the gold vaults of Fort Knox, Ky., were built in 1935.

By October 1939, the United States had well over half the world’s stock of gold.