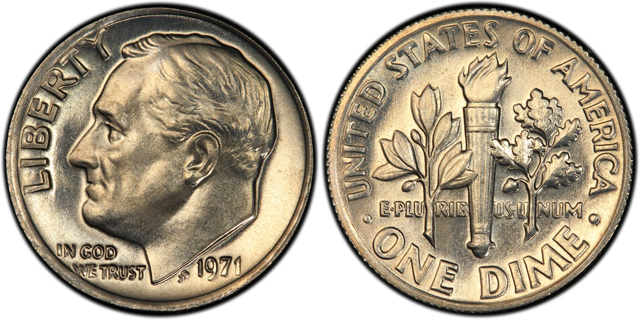 President Franklin Delano Roosevelt's sudden death of a cerebral hemorrhage on April 12, 1945, compelled Treasury officials to recommend the late president's portrait to be immediately placed on a coin of regular issue without having to wait for the centennial of his birth as had been done with Abraham Lincoln for the cent.

The dime was one of only three circulating coin denominations available for use for the memorial without introducing special legislation. The other two were the Lincoln cent and the Walking Liberty half dollar. The Act of Sept. 26, 1890, permitted the Secretary of the Treasury to change the designs on circulating coins after 25 years without the need for congressional approval.

COIN VALUES: See how much Roosevelt dimes are worth today

Chief Sculptor-Engraver John R. Sinnock's adopted obverse shows a portrait of Roosevelt facing left, with LIBERTY along the border before his face. IN GOD WE TRUST appears below Roosevelt's chin, with the date to the lower right of the truncation.

There is some possibility that Sinnock actually adapted the design from two bas relief models black sculptor Selma Burke produced for a commissioned plaque before the president's death.

Sinnock's reverse design is not much different from Adolph Weinman's design for the Winged Liberty Head dime, except for the elimination of the fasces in favor of a torch and making the vegetation more recognizably an olive branch of peace.

The finished coin was rushed into production in January 1946 to coincide with the 1946 March of Dimes birth defects fund-raising campaign. The intimate connection the Roosevelt dime had with the March of Dimes and the war against polio is often misjudged by collectors.

Because of the need to produce dimes in sufficient quantity to be used in the infantile paralysis drive that year, the first year of issue was also the highest mintage of the dime struck in silver, with more than 344.1 million coins produced.

The key to the series is the 1949-S, even though more than 13 million were struck at the San Francisco facility.

With silver prices rising and supplies dwindling, Treasury looked at a number of compositional alternatives to reduce costs. The Coinage Act of July 23, 1965, resulted in the composition of the dimes and quarter dollars being changed to two layers of copper-nickel bonded to a core of pure copper. The half dollar was changed to a reduced silver clad composition.

All 1965-67 coins were struck at the various Mint production facilities, but none bear Mint marks. The omission of the Mint marks was a continuation of the Mint's misguided belief that collectors were responsible for the coin shortages of 1963-65. The Mint did not want collectors hoarding the new dimes and preventing their use in circulation.

From 1946 to 1964, the Mint mark appeared on the reverse, to the lower left of the torch, just above the E in ONE. Beginning in 1968, the Mint mark was moved to the obverse, above the date. The P Mint mark for Philadelphia Mint-struck dimes did not appear on the coin until 1980.

Not long after Sinnock's new dime design appeared in circulation on Jan. 30, 1946 (the anniversary of Roosevelt's birth), rumors were buzzing that the designer's initials, JS, located at the base of the trunk of the neck opposite the date, stood for Joseph Stalin, the leader of the Soviet Union. The rumor indicated the initials were put there because of a pledge that Roosevelt had made to Stalin when the two leaders met along with British Prime Minister Winston Churchill at the Yalta Conference in February 1945. The rumor had no basis in fact. The initials were to designate the design as the work of John Sinnock.