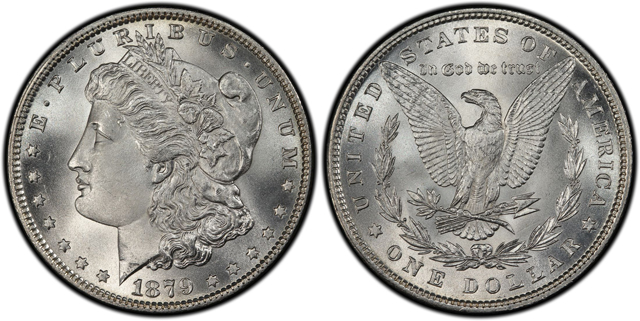 For decades the Morgan dollar, issued between 1878 and 1921, has ranked at the top U.S. coin collectors' favorite coins.

For decades the Morgan dollar has ranked at the top U.S. coin collectors' favorite coins. Why is the Morgan dollar so popular? There are many reasons, including: large size, attractive designs, numerous varieties, historical significance.

Morgan dollars are collected by type, by date and Mint mark, by die varieties, or by designs (several "different" designs were used for both sides, each slightly different than the others), depending on budget and interests.

COIN VALUES: See how much Morgan dollar coins are worth today

A type collection would be the smallest, at just one coin. The next smallest collection would be to collect examples of each design variation: four obverse designs and four reverses. Consult the Comprehensive Catalog and Encyclopedia of Morgan & Peace Dollars by Leroy Van Allen and A. George Mallis for details on how to identify the various designs (which are beyond the scope of this introductory article). Another method would be to collect one example of each date, with no regard for Mint mark. Such a set would require 28 pieces.

A date and Mint mark collection would be somewhat more challenging. The total number would depend upon whether the collector intends to purchase date and Mint mark varieties. One way might be to collect those pieces listed in Coin World's Coin Values retail price guide.

Probably the most challenging method is to collect by VAM variety. VAMs are named after Van Allen and Mallis, whose book catalogs the coins and is essential for collecting by varieties. The Top 100 Morgan Dollar Varieties: The VAM Keys by Michael S. Fey and Jeff Oxman also provides a useful listing of the most popularly collected VAMs.

The Morgan dollar arose out of the U.S. and international political and financial climate of the mid to late 19th century. Silver prices had dropped since the discovery of vast amounts of the metal in Nevada in 1859, and because Germany had "dumped tons of silver on the international market" in 1871 following the Franco-Prussian War, states researcher R.W. Julian in Silver Dollars & Trade Dollars of the United States by Q. David Bowers. Julian notes that silver coins disappeared from circulation during the American Civil War, hoarded by fearful citizens. Beginning in 1873, the Mint illegally began exchanging minor silver coins for the paper money introduced during the Civil War, with Congress making the action legal in 1875 (specie payments for paper money had been suspended during the war). The Civil War era minor silver coins reappeared in circulation in 1877, Julian points out, triggering a halt to the production of minor silver coins in 1878 due to the glut.

The standard silver dollar in the United States had been eliminated with the Coinage Act of 1873, although a Trade dollar intended for circulation outside of the United States was approved. However, with the cessation of production of minor silver coins, silver proponents feared an end to silver purchases by the federal government, according to Julian. These silver barons successfully lobbied for new legislation to permit a new coinage of silver dollars, even though as Julian adds, silver dollars did not circulate well and thus were unnecessary in commerce.

A compromise bill, introduced by Richard Bland in the House and William Allison in the Senate, passed as a result of the intense lobbying effort. President Hayes vetoed the bill as a foe of unlimited silver coinage, but Congress overrode the veto within hours. The resulting coin was called the Bland-Allison silver dollar upon its introduction in 1878. Only later did it come to be called the Morgan dollar, after designer George T. Morgan.

Morgan had been hired by the U.S. Mint in 1876 to redesign U.S. minor silver coinage. The Morgan designs used for the silver dollar were originally used on pattern half dollars.

More than 570.2 million Morgan dollars were struck from 1878 to 1904, when production was halted. Production resumed briefly in 1921, when another 86.7 million Morgans were struck. Because the silver dollar was not a popular denomination, many of the millions of Morgan dollars never circulated but were instead stored in Treasury vaults for years, some of which were melted while others were released decades later in huge quantities (one such release caused the once rare 1903-O Morgan dollar to drop from a value of $1,500 in Uncirculated in 1962, to $30 in 1963!). The federal government sold Carson City Morgan dollars from Treasury vaults during the 1970s and early 1980s.

Private hoards may still exist. Today, Morgan dollars are plentiful although certain dates are scarce or rare. The large quantities ensure, however, that current and future collectors will always have the Morgan dollar to collect.