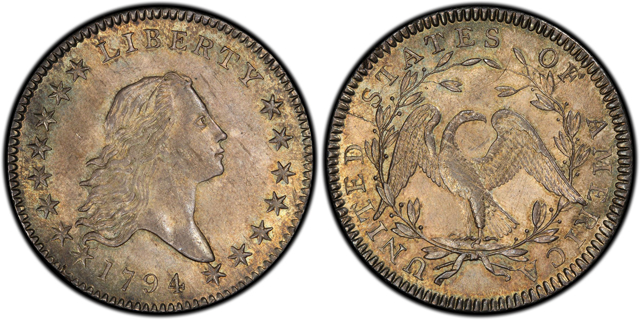 The Flowing Hair obverse design used in 1794 and 1795 was designed by Mint Engraver Robert Scot. 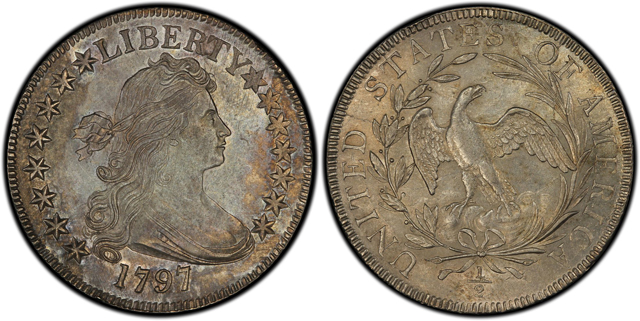 The Draped Bust obverse first struck in 1796 was designed by Robert Scot from a drawing of Mrs. William Bingham, and the Small Eagle reverse type was designed by John Eckstein. 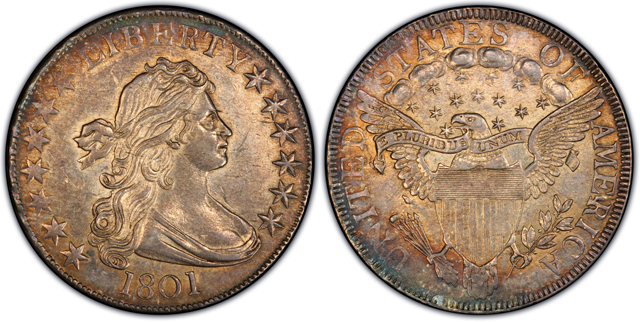 In 1798 the silver dollar adapted the Heraldic Eagle reverse designed by Robert Scot based on the Great Seal of the United States.

A challenge awaits anyone who wishes to acquire the type and variety half dollar coins struck beteen 1794 and 1807, generally referred to as "early half dollars.

The half dollar design became standard beginning in 1807 when the early designs were replaced with the Capped Bust design that would consistently be used on the denomination for more than 20 years.

The early half dollar types comprise the Flowing Hair; Draped Bust, Small Eagle; and Draped Bust, Heraldic Eagle. Many varieties of each of these exist.

Silver coins did not appear until 1794, since U.S. Mint Chief Coiner Henry Voigt and Assayer Albion Cox did not post the $10,000 surety bonds required for handling gold and silver bullion.

During early 1794, Congress passed an act that reduced the surety bond figure to a more affordable level. Local banks then began to deposit silver at the new Mint for coining.

The Flowing Hair obverse design used in 1794 and 1795 was designed by Mint Engraver Robert Scot, who produced a simplified replica of the Liberty Head design being used on the obverse of the early large cents. Scot's reverse design consisted of an eagle punch with individual numeral, letter, star and leaf punches.

The Draped Bust obverse first struck in 1796 was designed by Scot from a drawing of Mrs. William Bingham (nee Ann Willing) by Gilbert Stuart. Bingham was a Philadelphia socialite who was said to be one of the most beautiful women of her day.

The Small Eagle reverse type was designed by John Eckstein. The wreath palm branches were meant to be a compliment to South Carolina, the home state of Mint Director Henry W. DeSaussure, who left office before the design was struck.

There is debate regarding the order in which some dies were used, since two obverse dies dated 1796 have 15 and 16 stars, respectively, yet are known muled with a reverse used in 1797. The shift to 16 stars should have come when Tennessee entered the union in 1796.

It has been suggested that unrecorded prooflike presentation strikes may have been made with this unusual mix of mules. Archive data is not known on these coins.

No half dollar coins were struck after 1797 until 1801. In 1798 the silver dollar adapted the Heraldic Eagle reverse designed by Scot based on the Great Seal of the United States. This reverse was adapted for the half dime and dime denominations in 1800. When production of the half dollar resumed in 1801, the Heraldic Eagle reverse was used exclusively.

The eagle reverse punch did not include the stars, berries and end of the stem, which were the cause of many varieties of the coins of each year.

There are no known 1804 Draped Bust, Heraldic Eagle half dollars, although 1805/4 overdates exist. The only known 1804-dated half dollars have all proved to be counterfeits or altered 1805/4 coins.

The mintage of half dollar coins was interrupted in the summer of 1807 as the Mint changed over to the new Capped Bust design for the denomination.

All early half dollar coins have mintage figures of less than 1 million pieces. The lowest mintage of the major varieties is 934 pieces of the 1796 Draped Bust, Small Eagle, 15 Stars half dollar.

The highest mintage of any of these coin types is 839,576 for the 1805 Draped Bust, Heraldic Eagle half dollar. This mintage includes all of its many varieties.