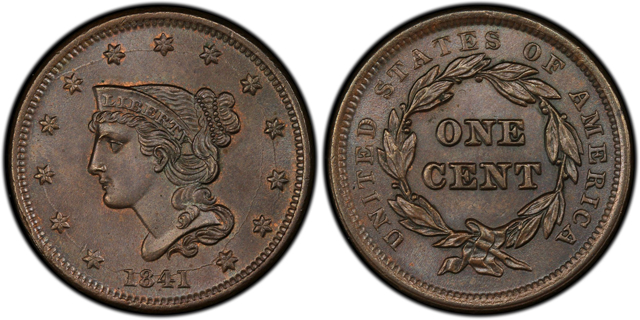 Late Date Coronet cents were struck between 1840 and 1857

Better is not always best.

The increasing sophistication of minting technology at the second Philadelphia Mint was a godsend for production, but it all but eliminated significant die varieties on U.S. coins, including the Late Date Coronet cents of 1840 through 1857. Die variety collectors lament the sameness of production that arose with those improvements. For them, better is not best.

The improvement in die production did not completely eliminate large cent die varieties, but it made those that were produced less interesting, at least in the eyes of some. Varieties are primarily though not strictly limited to the dates.

Among the interesting Late Date varieties: the 1843 Coronet, Obverse of 1842, Reverse of 1844 cent; the 1844/81 variety, in which the engraver punching the date into the die attempted to stamp the first two numerals into the die upside down, where the 4s were meant to be; and the 1855 cents, some with slanting 5s and others with upright 5s.

However, despite the improvements in die production, the Late Date large cent series remains extremely collectible.

COIN VALUES: See how much Late Date large cents are worth today

Researchers generally record 1840 as the first of the Late Date cents, although one 1839 obverse die, the Head of 1840, variety is identical to the portraits used from 1840 through 1843. New hubs were created in 1843, which show a slightly repositioned portrait and other modifications. The same hubs were used for the remainder of the series.

The large cent was an anachronism by the 1850s. Its heavy weight versus its limited buying power made it unpopular in commerce. Rising copper prices made the cent unprofitable to coin. An alternative became necessary.

A growing interest in a copper-nickel coinage (nickel lobbyists were powerful at the time) led to the approval of a smaller copper-nickel cent in 1857 to replace the aging large cent. The new, smaller 1857 Flying Eagle cent, authorized in the Act of Feb. 21, 1857, was released in quantity on May 27.

It was the end of one era, and the beginning of another.