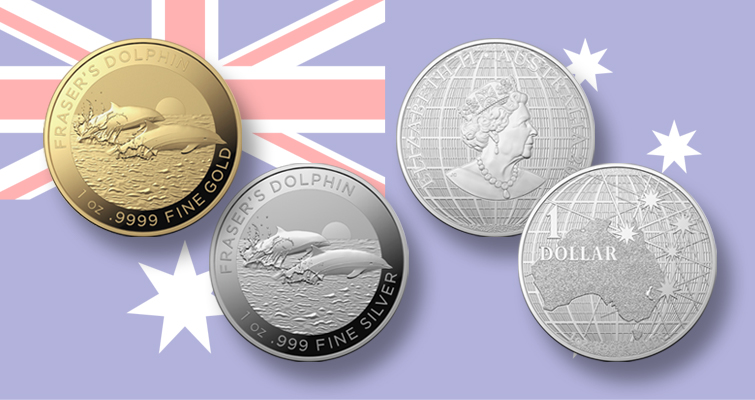 New coins are being issued for the Royal Australian Mint’s Beneath the Southern Skies and a series commemorating dolphins.

The 2021 version of the Beneath the Southern Skies design adorns the second annual release for the program.

The 2021 Fraser’s Dolphin coins are the third installment of the popular series honoring dolphins.

Both series offer Brilliant Uncirculated 1-ounce silver dollars. The Skies coin is the RAM’s first .9999 fine silver coin. The Dolphin coin is made of .999 fine silver.

All four of the coins feature the Jody Clark effigy of Queen Elizabeth II on the obverse.

The Southern Skies series is quintessentially Australian, including a map of Australia and the Southern Cross, inspired by one of Stuart Devlin’s original sketches.

The 2021 coins also feature New South Wales’ animal emblem, the platypus, marking the place of Sydney on the map. (The 2020 coins had a tiny kangaroo on the map.)

The gold coin in the Skies series is protected by three-tier security using proprietary technology that the RAM would not disclose.

The Dolphin coins depict a pair of Fraser’s dolphins (Lagenodelphis hosei), discovered by Francis Fraser in 1956, after Fraser identified the species from a mislabeled skeleton in the British Museum. Distinguishable by its cream and black flank stripes, the Fraser’s dolphin is stocky in shape with a short beak and small dorsal fins, flippers and flukes (tail sections).

Both gold coins measure 38.74 millimeters in diameter and have a mintage limit of 250 pieces.

The Skies silver coins are packed in tubes of 25 units and housed in monster boxes storing 20 tubes.

The Skies gold coins are placed in capsules, and shrink wrapped into towers of 10 units.

The Dolphin silver coins are placed in a capsule and gold coins are offered in a presentation case accompanied by a certificate of authenticity.

The coins are being offered through bullion distributors worldwide. 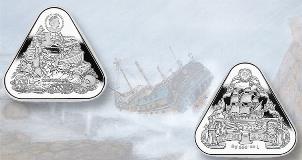 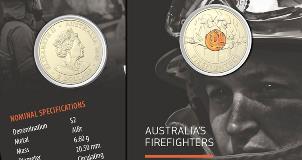 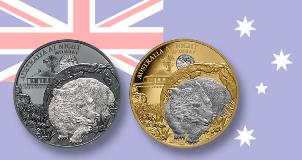 Australia at Night series continues with 2021 coins for wombat