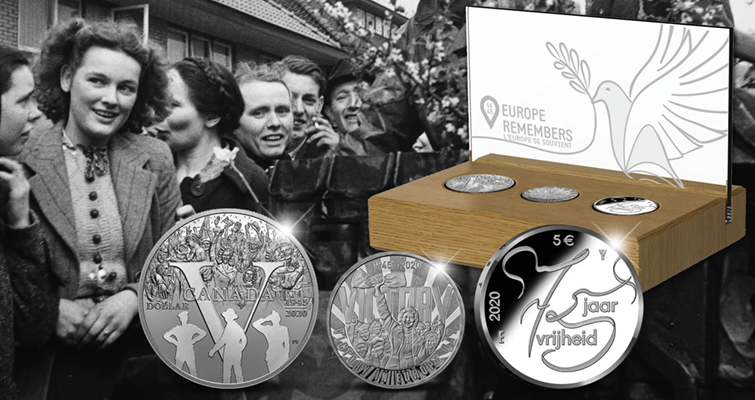 The Royal Dutch Mint partners with Canada and the United Kingdom to mark the 75th anniversary of the end of World War II with a three-coin set.

A special three-coin set from the Royal Dutch Mint combines a coin from the Netherlands with coins from Canada and the United Kingdom.

The Netherlands marks May 5 as Liberation Day, and in other countries May 8 is remembered as Victory in Europe Day, since that is when Germany formally capitulated.

The set contains a €5 coin from the Netherlands, a $1 coin from Canada and a £1 piece from the United Kingdom, the latter coin available only in this set (the other two are also sold individually by their respective issuers).

It was designed by Dutch artist Marijke van Warmerdam. Both the number “75” on the reverse and the portrait of the king on the obverse are constructed from a jaunty ribbon, to depict the festive nature of Liberation Day.

The single coin has a mintage of 6,500 pieces, but the remaining quantity is sold out.

Canada’s coin is inspired by the 1945 Victory 5-cent coin, so a large “V” for Victory dominates the reverse design by artist Pandora Young.

The scene reveals a jubilant crowd on May 8, 1945, when Canadians poured into streets and public places to celebrate V-E Day.

The spontaneous celebration gradually fades behind the “V” to become a scene of remembrance, while three foreground silhouettes represent the different branches (navy, army and air force) of the Canadian and British Armed Forces in which Canadians and Newfoundlanders served.

The obverse features the effigy of King George VI by T.H. Paget and a Victory privy mark.

The design on the £1 coin designed by Dominique Evans was inspired by her grandmother.

She told Evans lively stories about her time as a young girl during the war. At the heart of the coin, Evans placed celebrating people, backed by rays that echo the anti-aircraft searchlights but here become rays of hope.

The obverse of the coin was designed by Jody Clark and depicts the Queen Elizabeth II effigy.

The set is packaged in an oak box, which is accompanied by a glass panel made in exclusive collaboration with Royal Leerdam Crystal.

The sets retail for €299 each and are available for delivery beginning in July.

For more details, or to order the set, visit a special page at the Royal Dutch Mint website, www.royaldutchmint.com/europeremembers. 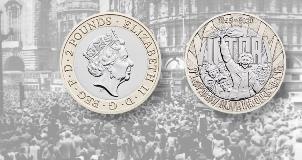 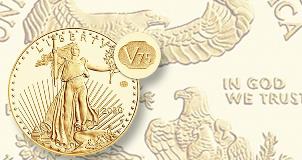 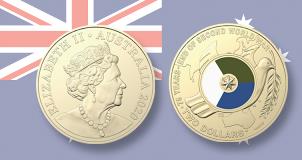