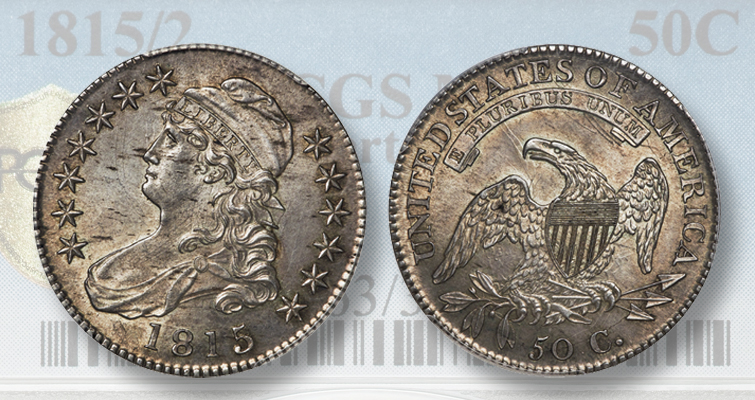 An O-101a 1815/2 Capped Bust half dollar that was discovered last year in an old English collection was offered in Heritage’s Oct. 7 auction. The curve of the 2 is seen at the date, while die cracks are noted on the reverse.

An 1815/2 Capped Bust half dollar that was a recent European discovery sold for $39,600 at Heritage’s Oct. 7 Premier Session auction in Dallas.

Coin World’s Paul Gilkes shared its story with our readers in the Sept. 21, 2020, issue, writing that it was discovered among several thousand U.S. and world coins stored in tobacco tins, secured in a canvas bag and kept for decades under the staircase of a British home.

Gilkes reported that Darren Edmonds, from Halesowen, England, said he had inherited the coins a decade ago, upon the passing of his mother, and said the coins had been in his family for at least 80 years.

According to Early Half Dollar Die Varieties 1794–1836 by Al C. Overton, with later editions revised and edited by Donald Parsley, “Unused dies from 1812 were retrieved from the unused die storage area of the Mint and a 5 was punched over the 2. This obverse die and a single accompanying reverse die were the only set of dies used to produce all the estimated 47,150 pieces dated 1815.”

Heritage writes, “It is somewhat amazing that any 1815 half dollars were struck at all. The Mint lacked silver bullion in a time when virtually all silver coinage was hoarded,” attributing it to the legacy of the War of 1812, when depositors hoarded all forms of silver and gold bullion and were reluctant to submit precious metals for coining at the Philadelphia Mint.

The Mint records the 47,150 half dollars as struck from just one die pair.

Overton lists two die states, O-101 and O-101a, for the date, the latter being characterized by die cracks on the reverse. Heritage writes, “The dies clashed early and often. The reverse die cracked extensively, but continued in service until its demise,” which ended the minting for that date.

These cracks are seen in the offered coin, putting it in the O-101a camp, and it is now graded Mint State 63 by Professional Coin Grading Service. Remainders of the digit 2 in the date are also visible, with a slight indication under the top-right curve of the 5.

Glenn Peterson observed in the recent edition of his book The Ultimate Guide to Attributing Bust Half Dollars, “Arguably, Capped Bust half dollars are the most collectible of all 19th century American coins,” since the dies for the series required extensive hand finishing where each letter, number and star was individually placed. Among the 453 die marriages of Capped Bust half dollars from 1807 to 1836, the marriage is particularly prized. 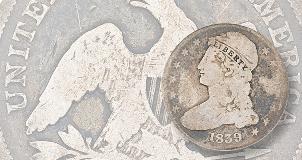 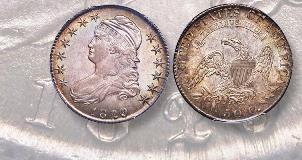 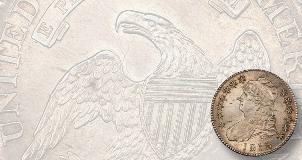