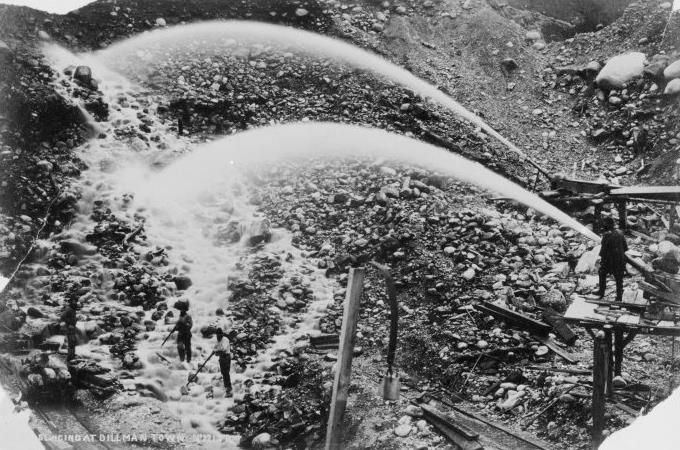 Photograph of gold sluicing at Dillman Town on New Zealand's West Coast in the 1880s.

Placer mining, named after the alluvial deposits (or “placers”) of gold found in the beds of streams, was the most common and productive method of gold mining until the 1920s. The principle is to separate gold from river gravel by washing it with water. The gold, mixed with the river gravel, is washed through a series of sluice boxes, each containing crossbars at the bottom. As the water and gravel pass through the boxes, which are slanted downward to employ the force of gravity, the gold sinks to the bottom and lodges behind the crossbars.

An important derivative of this basic placer mining is dredging. A continuously working chain of buckets brings gravel up from the riverbed onto a ship, where it is broken, screened and washed through sluices.

Extracting gold from solid rock, or lode mining, uses the same processes common to all underground mining. Entry into the ground is gained by breaking the rock, by drilling and blasting. The gold ore is broken away from the surrounding rock in a transportable size and hauled out of the mine.

These processes of mining yield an impure gold, containing amounts of silver, copper and other metals. Two methods are most commonly used to extract gold from its metal relatives — a chemical process using chlorine, and the electrolytic process, first used in United States Mints.

In the chlorine process, the impure gold is heated until it becomes molten. Chlorine is bubbled through the molten gold, converting the silver to silver chloride, which can be skimmed off the top of the liquid solution. Unlike the electrolytic process, this chlorine method does not extract platinum from the impure gold.

The electrolytic process involves suspending plates of pure gold alternately with plates of impure gold in a cell containing a solution of gold chloride and hydrochloric acid. The impure gold plates are the anode, the pure gold plates are the cathode. Through the liquid, a current of electricity is passed from the anode plates to the cathode plates. The gold dissolves from the anodes and is precipitated on the cathodes. The other metals that were combined with the impure gold dissolve in the liquid, except the silver, which is converted into an insoluble chloride and falls to the bottom of the cell. The gold that precipitates on the cathode plates is washed and melted into bars. This process yields gold that is more than .999 fine, or 99.9 percent pure.