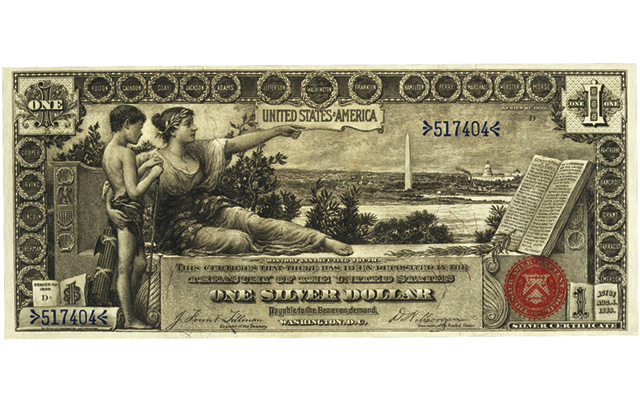 This Series 1896 $1 silver certificate is known as an Educational note. In the main vignette, known as History Instructing Youth, a female allegorical representation of history reclines on a stone bench, one arm around a young child and the other arm pointing to a stone tablet featuring a portion of the U.S. Constitution, located at the end of the bench.

Series 1896 $1, $2 and $5 silver certificates are called Educational notes. Many collectors consider the designs as the crème de la crème of all notes produced by the Bureau of Engraving and Printing.

The nickname “Educational” most likely came about because of the theme of the designs on the $1 denomination. The vignette is known as History Instructing Youth and depicts a female allegorical representation of history reclining on a stone bench with one arm around a young child and the other arm pointing to a stone tablet featuring a portion of the U.S. Constitution, located at the end of the bench. In the background of the vignette are the Washington Monument and the dome of the U.S. Capitol.

On three sides of the main scene are 23 wreaths, each bearing the last name of a statesman, military hero, inventor, writer, poet or other well-known American. The design was adapted from a mural by artist Will H. Low.