What is the Saddle Ridge Hoard and why was it such big news? 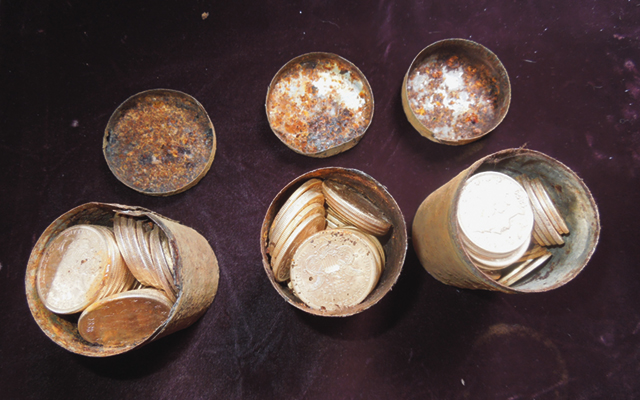 Three of the eight metal canisters from the “Saddle Ridge Hoard” are jammed with 19th century U.S. gold coins. One of the lids is for J.A. Folger & Company Golden Gate Brand Baking Powder. The style of can is from the 1880s, with embossed lettering. Folger also founded the coffee company that bears his surname.

The Saddle Ridge Hoard is a notable collection of 1,427 U.S. gold coins of the 19th century discovered in 2013 by a couple walking their dog on their property in California gold country near the Sierra Nevada Mountains.

Coin World senior editor Paul Gilkes reported in an article published online on May 16, 2014, that most of the coins, which were found stashed in eight metal cans, are Coronet $20 double eagles dated between 1855 and 1894, struck at the San Francisco Mint.

There are, however, coins that are dated as early as 1847 and as late as 1894, and coins that were struck at the Philadelphia Mint, Carson City Mint and Dahlonega Mint.

Altogether, the collection of coins is worth an estimated $10 million according to Kagin’s, the California dealer who helped the finders market the collection.

"The couple who found the stash of gold coins on their property while walking their dog early in February 2013 had traversed the landscape many times before and had even spotted one of the eight cans poking out of the ground,” Gilkes wrote. "Curiosity eventually became strong enough for the couple to investigate further. And what the couple discovered can only be described as miraculous.”

One of the Saddle Ridge coins is an 1866-S Coronet, No Motto gold $20 double eagle graded PCGS Mint State 62 that is the finest known certified by the grading service and estimated to be worth around $1 million.

David McCarthy, Kagin’s senior numismatist and researcher, described the first time he saw the coins after the couple brought them to Kagin’s in plastic bags.

“I picked up a double eagle dated 1890[-S] and removed it from its bag,” McCarthy said. "Looking at the tiny amount of metal that was exposed, I could see that the coin underneath was essentially perfect."

The find was made public in February 2014, though the couple remains anonymous, known only as John and Mary.”

"It’s impossible to describe really, the strange reality of that moment,” John said of discovering the first can of coins. "When I told [Mary], the look of bewilderment — her mouth was so wide open flies could have flown in and out several times.”

Mary said it was like finding “a wonderful hot potato."

The coins were listed for sale on Amazon and Kagin’s website in May with great fanfare to a market that was very curious about these coins.

In a story published online on Aug. 22, Gilkes cited McCarthy as saying that roughly 75 percent of the coins had been sold.

Through Amazon, interest was shown from potential buyers in France, Germany, Japan, Great Britain, Canada, Brazil and Hong Kong. McCarthy said Saddle Ridge coins offered on Amazon were only available to U.S. customers at that time.