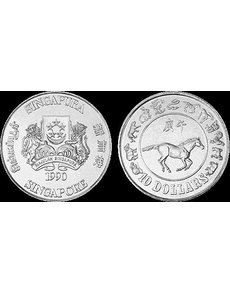 The first nonprecious metal Year of the Horse coin, the 1990 Singapore nickel $10 coin, was sold in lucky red packaging to appeal to those buying gifts for the Chinese New Year. Other zodiac animals are featured around the coin’s outer field. 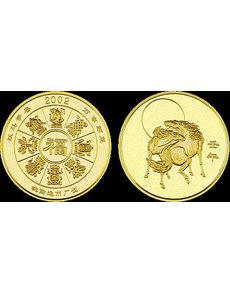 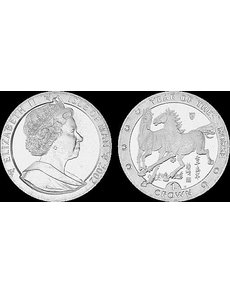 By 2002, non-Asian nations were issuing Chinese zodiac coins, such as this Year of the Horse copper-nickel crown from the Isle of Man, a British Commonwealth nation. 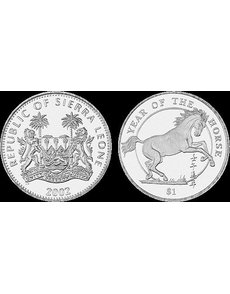 This 2002 Year of the Horse copper-nickel crown was issued by Sierra Leone, an African nation. 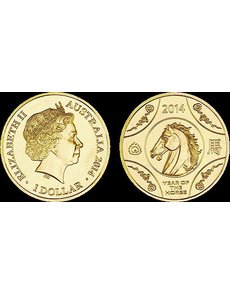 Even circulating commemorative coins are part of the Chinese Lunar year celebration as shown by this 2014 Australian dollar featuring a horse head and the legend YEAR OF THE HORSE. 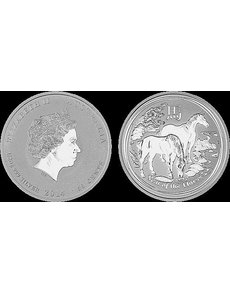 A bullion coin series from Australia celebrates the Chinese zodiac. This Australian Reverse Proof 2014 half-ounce .999 fine silver 50-cent coin is from the series. 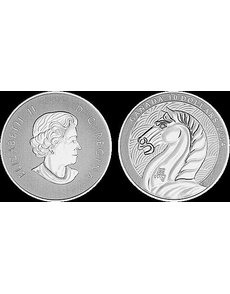 This Proof 2014 Year of the Horse silver $10 commemorative coin from Canada makes use of different silver finishes to dramatic effect, showcasing the stylized design. 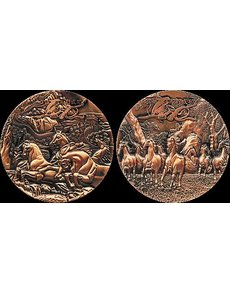 The design of this 2014 Year of the Horse 90-millimeter copper art medal from China shows a herd of horses running on the Great Wall. The medal was struck by the Shanghai Mint.

The Shengxiào, or Chinese zodiac, is a 5,000-year-old, 12-year repeating calendar that begins each of its years in late January or February with a New Year celebration.

Each year centers on an animal whose attributes are said to be transferred to the people born in the year. The 12 animals are rat (or mouse), ox, tiger, rabbit, dragon, snake, horse, goat (or sheep), monkey, rooster, dog and pig.

Adherents to the calendar believe that at his or her best, the person born in the Year of the Horse is idealistic and defiant against injustice. This person can be productive, enthusiastic, independent and honorable. At his or her worst, the horse is rash, rebellious, quarrelsome and moody. However, Chinese astrology holds that people are influenced by more than their yearly animal. There is also a monthly (inner) animal, daily (true) animal and hourly (secret) animal. So the child born in the Year of the Horse could be a goat internally, a dragon truly and a rabbit secretly.

This Chinese lunar year system has become better known each year worldwide as part of the Chinese New Year celebration. Commemorative coins have been both a cause and a result of that increased awareness. Chinese zodiac coins have slowly but surely been increasing in number each year since the first examples appeared four cycles ago.

Hong Kong (1976), Macao (1979), Singapore (1981) and China (1981) were the first to issue Chinese zodiac commemorative coins, and today more than a dozen nations have followed suit. Some nations that are nowhere near Asia, like Canada and Australia, issue multiple zodiac coins annually. Horses have been through four cycles since these first issues, with the coins and medals becoming more creative each time.

Also in 1990, China issued a series of commemorative gold, silver and platinum Horse coins, and Singapore also issued gold and silver Horse coins. All of these precious metal issues had relatively low mintages of 30,000 pieces or fewer.

It was Singapore’s affordable 1990 all-nickel $10 commemorative coin (with a mintage of 330,000 pieces) that likely educated the most people about the Chinese New Year. It was cleverly packaged from the mint in a padded red vinyl case. It is traditional to present New Year gifts in red envelopes for good luck.

By 2002, several more nations were finding Chinese zodiac coins profitable enough to create a series of them. This included nations inside and outside of Asia: Australia, Ghana, Isle of Man, Laos, Mongolia, Sierra Leone and Vietnam.

China was also issuing multiple zodiac medal designs each year by this time, although customers were sometimes confused about which medals were government made and which were made by private Chinese mints.

Official medals are manufactured at all three Chinese government mints, Nanjing, Shanghai and Shenyang; most are from the latter two. Zodiac designs are seen on medals in sizes from 30 to 90 millimeters and in metals like brass, copper, gold- or silver-plated alloy, and silver. The large high-relief 80-millimeter and 90-millimeter copper medals are especially coveted by collectors. Both sides of an official medal for 2014 depict the Great Wall of China and horses.

Australia and Canada are nations built by immigration, very much like the United States, and their citizens of Asian descent have several Chinese zodiac coin designs to choose from each year.

Australia also issued an affordable circulating commemorative coin for the Year of the Horse, a 2014 copper-aluminum-nickel dollar with a horse’s head in profile.

Canada issued three different silver $15 Year of the Horse lunar coins for 2014, plus a Maple Leaf 1-ounce silver $5 coin with a horse privy mark, a kilogram silver $250 coin and a gold $150 coin.

Just one generation ago, relatively few coin collectors had heard of the Chinese lunar calendar. Thanks in part to world coins and medals, this ancient celebration of Asian origin is known world-wide and an ongoing part of the coin collecting hobby. ¦