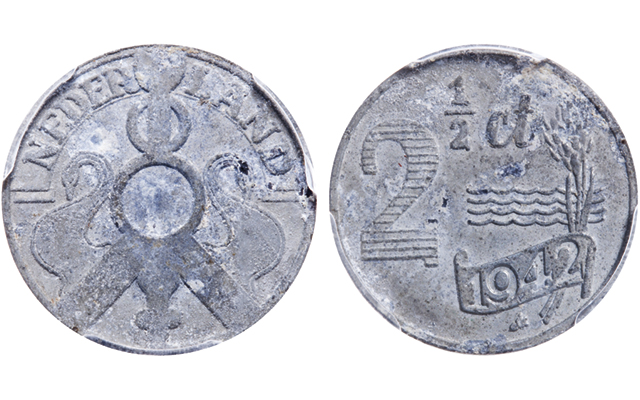 A rare 1942 Netherlands 2½-cent coin, one of 30 believed to have escaped melting, is offered June 26 in an auction in Toronto and has an estimate of $10,000 in Canadian funds.

In 1942, during World War II, the Netherlands struck a reported 200,000 examples of the zinc 2½-cent coin, but most wound up being melted.

One of reportedly 30 examples to escape the melting pot is offered in the Canadian Legacy Sale in Toronto on June 26. The auction is being held over three days, until June 28, and is jointly conducted by Canadian Coin & Currency and Moore Numismatics Auctions Inc.

The example in the auction shows a moderate amount of environmental encrustation (zinc is notoriously reactive as a coinage metal). Graded About Uncirculated 50 Details by Professional Coin Grading Service, the underlying details remain sharp, according to the auction catalog.

It is estimated by the auctioneers at $10,000 in Canadian funds, somewhat below catalog values, the estimate reflecting the damage.

An auction catalog may be downloaded or viewed at the Canadian Coin & Currency website.