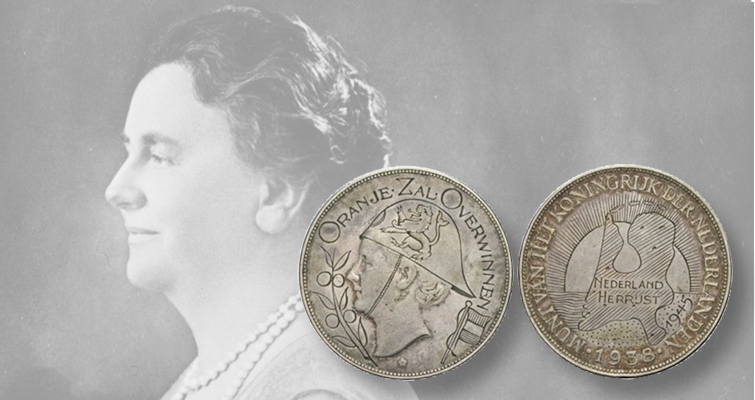 When German forces swept across the border with the Netherlands during World War II, Dutch Queen Wilhelmina and the royal family fled to safety in the United Kingdom.

Distance didn’t diminish her leadership role, as the queen rallied the nation during difficult times, and after the Allied victory she eventually returned to lead her people again, which by then had a new affection for her.

The story of her exile and return is told through two lots from Karel de Geus’s April 2 auction in the Netherlands: two silver circulation coins from the era feature carvings from an unknown artist or artists that, according to de Geus, may be looked upon “as an act of resistance, silver being scarce [those] days and expensive.”

The obverse of the 1922 silver 1-guilden coin is carved so the legend that normally appears — WILHEMINA KONINGIN DER NEDERLANDEN (or Wilhemina, Queen of the Netherlands) — now reads WILHEMINA IN LONDEN, a reference to the English opening their country to the Dutch royal family. The three words are separated by two engraved orange branches, orange being a symbol of the Dutch. The queen wears a Dutch army helmet in the scene on the coin.

The reverse of the coin is not altered.

The 1-guilder coin measures 28 millimeters in diameter, or slightly smaller than a U.S. Kennedy half dollar (which is 30.61 millimeters).

The other piece of numismatic folk art, a 1938 silver 2½-guilder coin, also features the queen adorned in a Dutch helmet, with the helmet sporting a lion passant (having one front paw raised). An orange branch is engraved in the field in front of the queen’s face.

If the orange branch and queen weren’t enough to identify the cause, the legend ORANGE ZAL OVERWINNEN, which translates to “Orange will prevail,” clarifies the pro-Netherlands’ stance of the artist.

A map of the low-lying country was engraved on the reverse of the coin, set against a rising sun signifying hope for a new day; the legend NEDERLAND HERRJIST on the map translates to “Netherlands rises again.” Though the coin is dated 1938, the artist added 1945 to the scene, perhaps close to the end of the war as victory neared.

While the exact origins of these presumably unique pieces is unclear — were they created by soldiers on the front lines or citizens under occupation? — they remain as symbols of hope among the Dutch people to persevere during war.

All winning bids are subject to a 20 percent buyer’s fee and totals are payable in euros.

The catalog may be viewed or downloaded at the firm’s website, www.kareldegeus.nl/, or it may be ordered from the firm for $20.