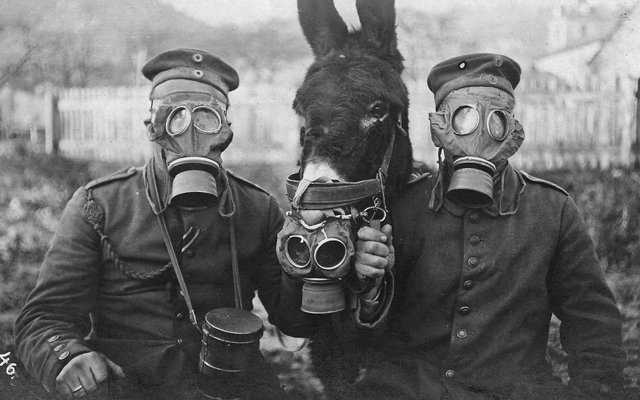 Once chemical weapons were added to the military arsenals, precautions had to be taken, even for the animals, in the form of gas masks to protect against deadly poisonous gases.

Image courtesy of collections of the Imperial War Museums, in public domain. 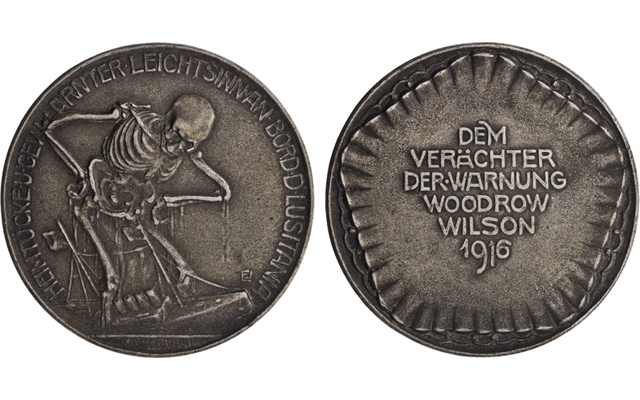 Death standing over the sinking Lusitania graces the obverse of this iron medal by German medalist Walther Eberbach. The reverse includes the inscription that translates from the German to English as “Woodrow Wilson ignored the warning.” 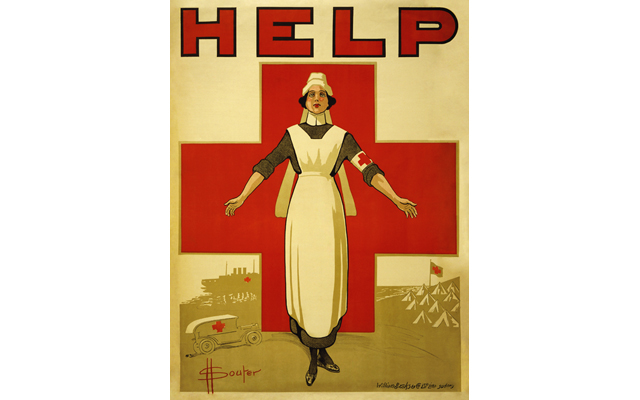 Near the war’s onset, the Red Cross called on nurses to care for wounded soldiers on both sides of the fighting.

It was called “the war that will end war,” by author H.G. Wells. World War I, however, was anything but. The June 28, 1914, assassination in Sarajevo of Archduke Franz Ferdinand of Austria, heir to the throne of Austria-Hungary, and his wife, Sophie, served as the war’s trigger.

Suspecting that Serbia was behind the actions of the assassin, Bosnian Serb nationalist Gavrilo Princip, and his accomplices, the Austrian government declared war against Serbia on July 28, 1914.

World War I had begun.

Military historian Edward M. Coffman indicates the root causes of the war ran much deeper, however.

National pride was extreme among the populace in many European nations that had increased their military capabilities to epic proportions. The race for continued colonial expansion was on and the invocation of military alliances formed decades before became a necessity, according to Coffman.

It was time to exercise some of that military muscle.

World War I placed the world’s major economic powers into two, opposite camps — the Allies and the Central Powers.

The original core of the Allies was formed from the Triple Entente. Derived from the French meaning “friendship, understanding, agreement,” the entente united the Russian Empire, the French Third Republic, and the United Kingdom of Great Britain and Ireland after the Aug. 31, 1907, signing of the Anglo-Russian Entente.

As the war progressed, battles were fought in the air, by land, and by sea, traversing Europe, Africa, the Middle East, the Pacific Islands, China and the coastal waters of South America and North America. World War I witnessed mobilization of more than 70 million military personnel on both sides.

An estimated 7 million civilians lost their lives in the hostilities.

World War I is considered the costliest war in terms of bloodshed.

The introduction of new military technologies enhanced man’s inhumanity to man, leading to increasingly deadly outcomes. Each piece of weaponry or tactic employed by one side was counterbalanced by the introduction of something more devastating on the other side.

Many of the bloodiest battles of World War I were fought from trenches. Many soldiers died from shrapnel wounds inflicted by exploding hand grenades and artillery shells. Conditions in the trenches were also conducive to deadly infections that would claim lives if the source of the initial wounds didn’t.

World War I introduced some of the deadliest substances then, and in some cases still, known to man. Chemical warfare. Poisonous gases that burn, blind and kill. Gas masks, in some instances, were useless.

The nurses and doctors of the International Red Cross had their mettle tested treating combat casualties on both sides of the war in a way they never had before in the group’s 50-year history.

Despite the atrocities, soldiers from both sides exercised some compassion, with periodic truces called to allow retrieval of the dead and wounded.

The Christmas truce of 1914 experienced British, French and German soldiers venturing into “no man’s land” during the unofficial ceasefire, to exchange seasonal greetings before returning to the business of trying to kill one another.

The eventual Allied victory resulted in the dismantling of the German, Russian, Ottoman and Austro-Hungarian empires; creation of new European and Middle East countries; redistribution of German colonies and Ottoman Empire regions to other powers; the June 28, 1919, signing of the Treaty of Versailles between the Allies powers and Germany; and the establishment of the League of Nations in January 1920. The League’s main goals, as stated in its own covenants, were to prevent wars through unified security and disarmament. International disputes were to be settled through negotiation and arbitration. What looked good on paper did not necessarily work in practice. Less than two decades later, history would repeat itself with World War II.

To mark the 100th anniversary of the start of World War I, the American Numismatic Society in August introduced a new Web-based research catalog comprising thousands of art medals, commemorative medals and tokens reflecting “Art of Devastation.”

Among these is a haunting iron medal from German medalist Walther Eberbach depicting Death standing over the sinking RMS Lusitania. The civilian vessel — carrying passengers and a cargo that included munitions — was sunk May 7, 1915, by torpedoes from a German U-boat, killing 1,198 passengers and crew.