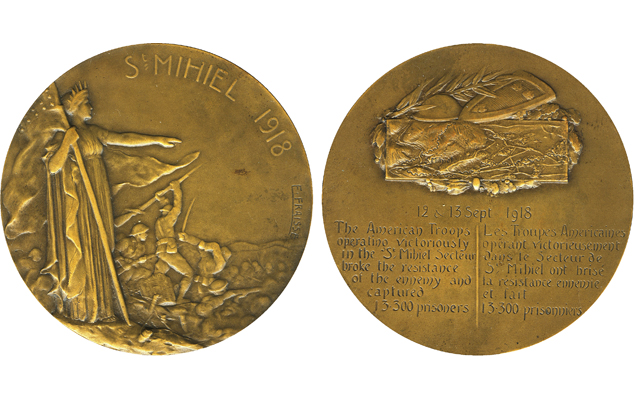 French sculptor, engraver and medalist Édouard Fraisse executed this 68-millimeter bronze medal in 1918 to celebrate the American victory at the Battle of Saint-Mihiel, where American troops broke through enemy resistance and captured 13,300 prisoners. 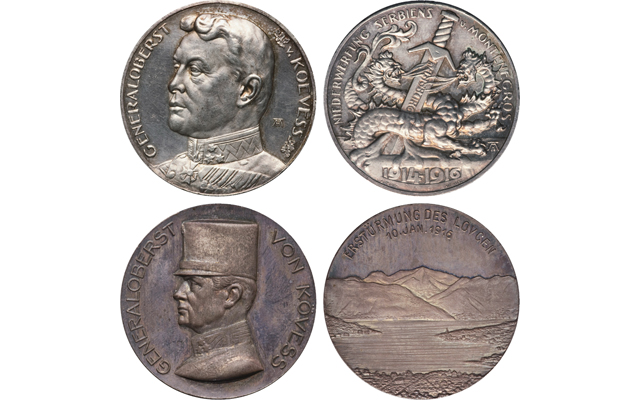 Austro-Hungarian Gen. Hermann von Koevess is depicted on the obverse of two 33-millimeter medals. The top medal reflects the conquest of Serbia. Below, the medal reflects the taking of the fortress of Lovcen in Montenegro in 1916. 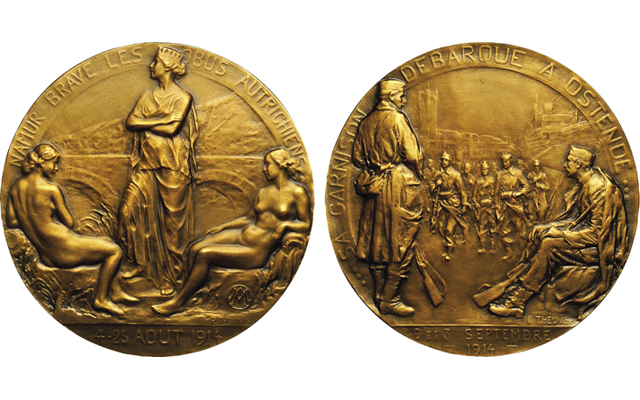 A 70-millimeter bronze medal by Belgian medalist P. Theunis depicts the 1914 defense of Namur by Belgian troops against German forces and the debarkation of its garrison at Ostende.

The Battle of Saint-Mihiel in France was fought against German positions from Sept. 12 to 15, 1918, by the 550,000-member American Expeditionary Force and 48,000 French troops under the command of U.S. Gen. John J. Pershing, a subsequent Medal of Honor recipient.

This battle, a victory for the Allies, marked the first use of the term “D-Day” to signify the start of a major combat offensive.

French sculptor, engraver and medalist Édouard Fraisse executed a 68-millimeter bronze medal to recognize the victory, during which 13,300 German prisoners were taken.

Examples of the medal can often be found for less than $200.

Gen. Hermann von Koevess was the final, albeit totally ceremonial, commander-in-chief of the military forces of Austria-Hungary.

Von Koevess was near retirement when he was given the command post soon after World War I broke out.

Although relatively undistinguished during his final military assignment, von Koevess is recognized on at least two 33-millimeter silver medals from 1916.

One commemorates the conquering of Serbia. The other marks the taking of the fortress of Lovcen in Montenegro.

Belgian medalist P. Theunis engraved a 70-millimeter bronze medal depicting the August 1914 defense of the fortress at Namur by Belgian troops against German forces and the debarkation of its garrison at Ostende.

An example of the 1914 medal, from the Eric P. Newman Collection, and certified Mint State 66 brown by Numismatic Guaranty Corp., was sold at auction by Heritage on April 24, 2014, for $235.