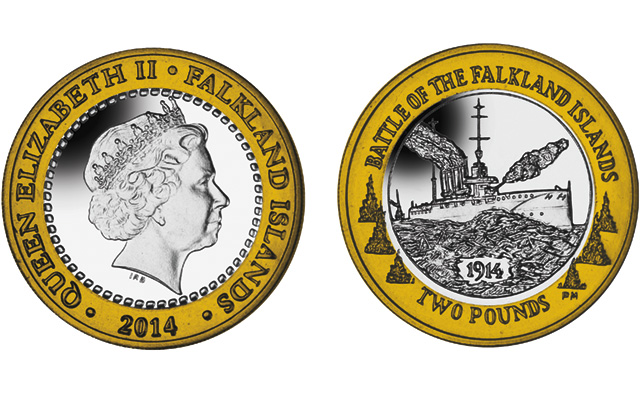 The Battle of Falkland Islands a century ago is now commemorated on a £2 coin struck by the Pobjoy Mint. 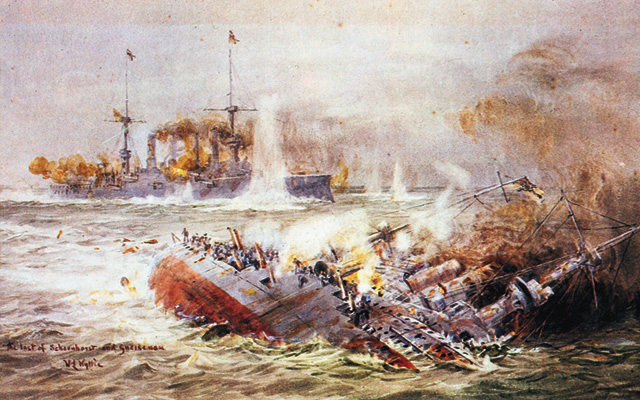 Painting titled Battle of Falkland Islands was created in 1918. 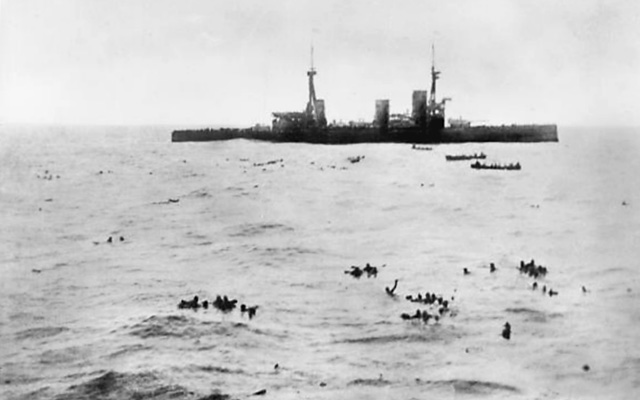 The Royal Navy battlecruiser HMS Inflexible standing by to pick up survivors from the German cruiser SMS Gneisenau after the Battle of the Falkland Islands.

A century ago, British naval forces defeated the Imperial German Navy in the Battle of the Falkland Islands during World War I in the South Atlantic.

The victorious engagement, on Dec. 8, 1914, is now being honored on a £2 ringed-bimetallic coin issued by the Falkland Islands.

At the start of World War I in 1914, a strategic naval base located in the Falkland Islands allowed the British Royal Navy to control the South Atlantic. One month after German naval forces inflicted the Royal Navy’s first defeat in a century, sinking two British cruisers with all hands, Admiral Maximilian von Spee, leader of the German naval forces, brought his fleet close to British squadrons anchored in the Falkland Islands. He was confident he could outrun the British ships he saw in the port.

However, the German forces found themselves pursued by the swifter than expected British ships. All told, Germany lost four warships and more than 2,000 sailors in the Falkland Islands, compared with only 10 British deaths.

Referred to as the most decisive naval battle of World War I, the Battle of the Falkland Islands gave the allies a much-needed surge of confidence on the seas, which was especially important as other areas of the war such as Gallipoli, were not proceeding as hoped.

The battle also represented one of the last important instances of old-style naval warfare, between ships and sailors and their guns alone, with neither aid nor interference of airplanes, submarines or underwater minefields.

The coin’s central design features the fast light cruiser HMS Glasgow, one of the key ships in the battle. The design extends to the surrounding ring, with the depiction of water splashing up as bombs explode. The date 1914 appears in the water below the depiction of the cruiser.

The Ian Rank-Broadley effigy of Queen Elizabeth II appears on the obverse of the ringed-bimetallic coin.

The Pobjoy Mint struck the coin, which weighs 12 grams and measures 28.4 millimeters in diameter.

The coin has an unlimited mintage and retails for $12.95 U.S.