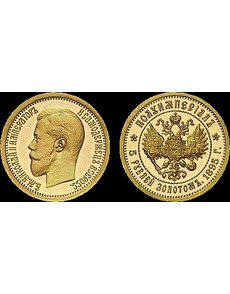 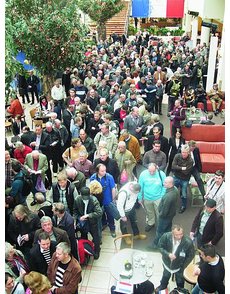 The entry hall of the Estrel Convention Center is choked with a crowd lining up for the public opening. 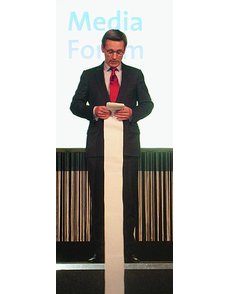 President Director-General Christophe Beaux, left, represents the Monnaie de Paris during the Media Forum Feb. 1. Beaux joked before his 20-minute speech that he had a short presentation with “only” 80 points. 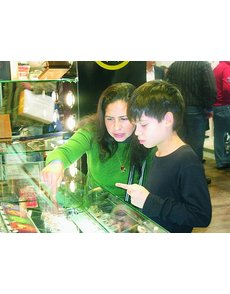 A mother and her son find something of interest at the Mint of Poland booth, left. 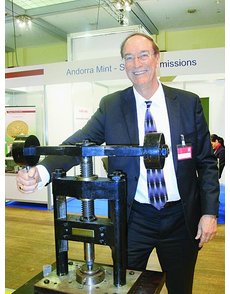 To borrow from the band Tesla, the World Money Fair in Berlin might be best summed up as “lines, lines, everywhere are lines.”

The show, held Feb. 1 to 3 at the Estrel Convention Center, offered more lines than a theme park. Choking, squeezing lines to enter. Orderly but lengthy queues to get circulating commemorative €2 coins at face value. Calm but forceful lines at some dealers’ tables.

A crowd from around the globe gathered for the 42nd installment of the event, the eighth held in Germany’s capital since being moved there in 2006.

Show organizers provided their annual attendance figure of 15,000 people across all three days, though the crowd seemed slightly smaller than in previous years.

An additional 300 registrants heard presentations during an industry-only technical forum, and an estimated 500 people filled the hall Feb. 1 for the public Media Forum, where representatives of mints and central banks highlighted their hits from 2012 and previewed new issues for 2013.

Fritz Rudolph Künker’s Jan. 31 trio of auctions, all conducted the day before the opening of the show, realized a hammer price of €7.6 million (about $10.2 million in U.S. funds).

Many of the attendees purchased world mint passports enabling them to visit each participating mint or central bank booth and receive an Uncirculated example of a low-denomination coin. Lines of adults clutching the passports, often with children in tow, sometimes caused traffic jams around world mint booths.

Visitors could strike their own medalet featuring John F. Kennedy at the Berlin State Mint booth, or reach through slots to try to grasp two giant gold bars that were inside an enclosed case at the Coin Invest Direct booth, among other highlights. ¦