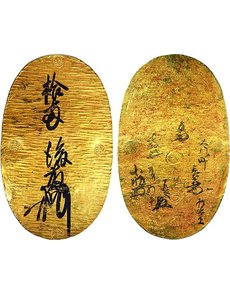 A rare gold oban from Japan highlights world coin offerings during three sessions of Heritage Auctions’ Sept. 7 to 9 auction in Long Beach. The oban features a rare family mark on the reverse and is the largest size of oban ever issued.

Leading the public auction is an extremely rare gold oban from Japan dating from circa 1573 to 1591 during the Meiji Period.

The gold Tensho Naga (“Naga” translates as “Long Type”) oban, which weighs 165.56 grams, is the largest in physical size of all the obans minted. It measures 103 millimeters wide and 170 millimeters tall.

What makes the example offered here even more rare is the upper of two stamps on the reverse, because it is a so-called Omodaka stamp.

According to the auction house, the Mori family was given permission by the uniter of Japan (Toyotomi Hideyoshi) to stamp these .730 fine gold, .270 fine silver obans and make them official issues using their family stamp featuring an Omodaka plant leaf and flower.

“It is not known how many were minted, but very few exist today,” according to the catalog.

A 15 percent buyer’s fee will be added to the final closing price of each lot won.