World coins proving popular at Heritage as firm soars past 2013 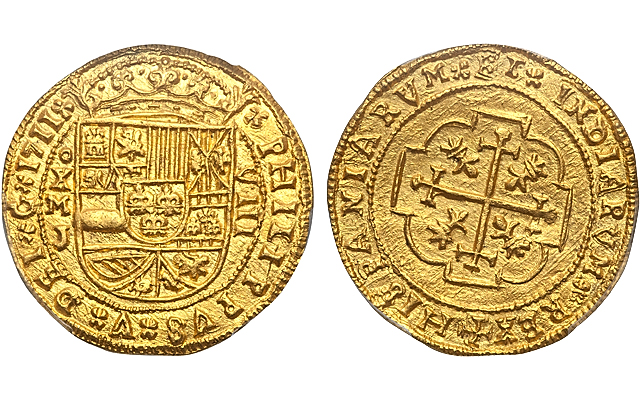 This 1711 Royal gold 8-escudo cob of Mexico, one of 50 known, realized $293,750 in a January auction in New York held by Heritage Auctions. The firm has seen record interest in world and ancient coins in 2014.

The firm announced May 28 that its auctions of world and ancient coins had already exceeded $39 million, in five months surpassing sales in the same category for all of 2013. Last year the auction house notched total world and ancient coin sales of just over $35.6 million, according to figures the company provided.

Driving the record sales have been two major New York-based auctions early in 2014, the first conducted at the New York International Numismatic Convention early in January and the second, barely a week later, being composed of world coins from the collection of famed numismatist Eric P. Newman.

“These results show just how strong the World & Ancient Coin market has become,” said Cristiano Bierrenbach, vice president of Heritage. “They also show how dedicated Heritage is to growing this and developing this category for the long term.”

The Newman sale, part III, realized some $6 million, and that was followed by the Chicago International Coin Fair auction in April that included some $5 million of ancient coins, a record offering for the firm.

Weekly world coin auctions, which close on www.HA.com every Thursday,  are welcoming new bidders, according to Heritage, noting that 12 percent of bidders in these auctions are new clients. The increase in bidders has pushed average sales above $45,000 per week for an average of 300 lots, both new highs.

Upcoming world and ancient coin auctions include a Platinum Night auction during the American Numismatic Association World’s Fair of Money, Aug. 6 to 11 in Chicago, and a Signature Auction in Long Beach, Calif., Sept. 3 to 8.

To learn more about the firm's auctions, visit its website or telephone Heritage toll free at 800-872-6467.